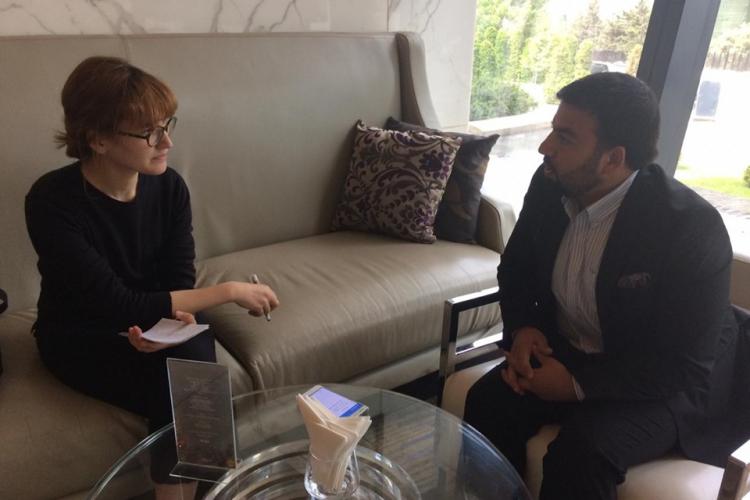 About the purpose of this visit to Azerbaijan?

-Actually, this is a follow-up meeting after the head of two states. President of Azerbaijan and Afghanistan’s President Ashraf Ghani met twice last year and in the very recent discussion will like the main purpose of increasing the volume of business and trade not only one way but two way from Afghanistan to Azerbaijan and all the way back to Afghanistan. So, the purpose is to follow-up the meeting, we have done some homework back home and we came to some new opportunities to boost the business, actually its natural volume increase of business and trade mutually. And particularly, my part is fuel and gas.

-You have already met with SOCAR officials, the president, so, may we expect any tangible results from this meeting, the discussion in the near future?

-I think, yes. To be very frank, we were expecting and do expect a very positive attitude, which we have received. The ultimate spread was that we will be looking into opportunities with closed eyes not closed eyes but open eyes, and we’ll really embrace the situation. So, the opportunity wheel what offering from last actually the program I have started it’s like three months ago we have been negotiating to increase the volume of fuel imports.

And particularly, imports from the Azerbaijani market. We noticed there a lot of demand for jet fuels from Azerbaijan, we were receiving. At the same time, we’re trying to resume more fuel from Azerbaijan. That’s like diesel and petrol. There is an ultimate answer, yes! There is an opportunity, we have to work on some small issues particularly administrative registration of state-owned Afghan company at the same time. There’s another, not a bottleneck but there are different procedures for business opportunities, SOCAR also doesn’t have a quota system for Afghanistan. We were expecting if they can allocate a certain amount of fuel for export to Afghan market so that we will be looking and finding the right partners to buy it or at least we’ll be purchasing it on behalf of the Afghan government for the Afghan market.

But they have some details in a discussion on the subject that they are lacking the quota system but they’re happy to work on a new mechanism of allocating a planning amount for Afghanistan, which is almost the same like quota but not names to quota. So they agreed on some basics. We think fuel and gas are one of the key elements that we can really increase the volume of our business and trade to the expected plan. For example, in 2017, I know, it was 150 million dollars, but we didn’t reach it.

But we have something in 2018 we have been doing business about 72 million dollars altogether. There is room to increase and that is a big item could be the fuel and that’s why we would urge our counterparts in Azerbaijan to look into the market as a competitive market. In next door, we have Iran, Turkmenistan. We have also Kazakhstan, Kirghistan, and Uzbekistan to supply but looking into historic ties at this point we’re not neighbors, but we all are thinking and working as neighbors. That’s why we need to have these multiple sources.

-As a number of countries, Afghanistan may also search alternative sources after application of sanctions to Iran. Can Azerbaijan be a country that Afghanistan can closely cooperate in this case?

-You’re right, seeing Iran being under sanctions Afghanistan as a member of the global strategic partners with the US and also we have some binding agreements regionally. We are also a close neighbor of Iran. We do respect international regulations as well as they respect our bilateral relations with Iran, too. So, very particularly, on Iran’s issue, we have some exclusive clauses to not be sanctioned, at the same time, we have noticed if anything happens. So far, we have excluded from the sanctions, but we do look into multiple sources of the supply chain to Afghanistan. We not relying only on one source of Iran or Turkmenistan. If they are good sources based on quality and quantity and pricing, sometimes we will forget pricing and sometime we will forget the quality. I think, Azerbaijan wins the market for good quality rather than thinking of it to replace it with Iran. But yes, if we have a good flow of fuel compensating and taking care of the transportation of the cost, an additional cost that will have that will not be comprehensive in terms of pricing with Iran. That will be like an option to reduce our reliance on some other countries on diversified toward Azerbaijan. Mainly it’s not an ultimate goal to find other partners, but if we have other sources why not, it’s good for our market.

-I think, we both have our preference productions and we have competitive products that are good at particularly agriculture. For example, we are good in producing some very different type of grapes, I know that there is lacking in here. You have pomegranates but we have a variety of it and as well as the marble. I think there’s a big need of marble in Azerbaijan. We have a lot of that and the good news is that there’s the first convoy of trucks carrying Afghan white marble is on the way and they have reached Turkmenistan, they’ll be heading road to Azerbaijan, to the first time again to increase the volume of export to Azerbaijan. Meanwhile, I think there are some mining metals and we can also offer joint ventures and so many service sector that Azerbaijan is good at will be offering opportunities of joint venture productions, services in back home. But if to make the long-list short, it will be like the mining metals, marbles, vegetables. There are full cargo flights to Kabul every week. That’s for NATO. They come emptied back to Azerbaijan, so taking the opportunity we can have the air cargo or air corridor. We have already resumed we have zafaran, almonds and dried fruit that can be not only for Azerbaijan market but also beyond that we’ve been exporting now a lot of dried fruits and fresh fruits, marbles to countries around the region. So, Azerbaijan is on our top list and our relations are on the highest level of two countryship partners.

– About the economic challenges which Afghanistan faces because of the obvious reasons, you know, these security issues. So, what kind of policy the government follows and will follow in the future in order to provide a more secure environment for business, to attract foreign investment in the country?

Look, unfortunately, Afghanistan has had this imposed war for the last two decades. There was pocket insecurity but to look at the from another side such an environment also has a huge incentive package for those who do their invest or these opportunities have a bigger return on investment. If you take the risk, some people have done and they have taken the money out of Afghanistan and they did the businesses, but we are slowly moving toward prosperity.

After decades of war and turmoil essentially it is like constantly 18 years. We have a central government, proper election. There there’s no coup d’etat, there’s nothing to take the change of power takes place. We have democratic institutions, judiciary system in place for 18 years. So things are shaping, all these shaped in some cases and the environment is very competitive by law and regulation where one of the very modern and market-oriented market policies. You can invest as much as you want and take back your money and our investment law is a very free and liberal one. You can have a hundred percent share. You can buy land and properties at the same time you see, for doing business we have been coping some of the services like ASAN Xidmat have also in Afghanistan and come from Georgia, but we notice that we also been improved a lot in terms of ranking doing business much better doing comparing the years before. So slowly we are looking into a free market and to attract foreign investment. The security they have had two ways, you take a risk you make good money because you don’t have much competitivity. But once what is very secure, everything is stable, it to be hard to compete. But I would urge Azeri investors to look at this opportunity if you’re not only investing, but you also contribute to civilization everyone wants some.

You are contributing to peace and strong Afghanistan. Meanwhile, I’m pretty sure, by the culture we are not too different. We’re not afraid, no Azeris are afraid of such political insecurity news these all in public international media. They can take that risk, which is not fact (tact)  that political bleak and black that shown on TV. There is insecurity, a lot of areas are in secure, big cities, like Herat, Mazar, Kandahar is quite open for investment and you see a lot of investors there from different countries. So, to make it short is that there are challenges but there are opportunities like every other country.

But the only insecurity will be an issue that you’ll be challenged. But that is not in major cities. So the major cities are open for investment. I think you should take advantage of the first mover advantage.

-About the visits from Azerbaijan (SOCAR) to Afghanistan on an official level?

I think we will be coming back. Because we need to buy fuel but we will be also working on some bigger tenders, like upstream explorations of oil reserves in Afghanistan, we have a number of plots which are at the border of Turkmenistan and Iran and we have Hairatan basin, Afghan-Tajikistan basin which is near to Uzbekistan, Turkmenistan, and Afghanistan.

So, those areas will be announced soon. I think, SOCAR having the experience of exploration will be on top of our list to be invited for buildings and I hope they do take this opportunity to not only export oil but also export technology and boosting investment and then we will be thinking of not only Central Asia and Asia, beyond South Asia