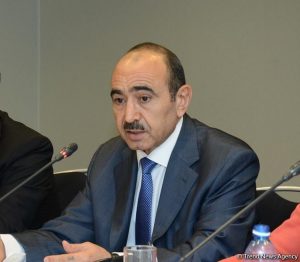 Maintaining public order, not political affiliation is the main criterion for police, said Azerbaijani President’s Assistant for Public and Political Affairs Ali Hasanov.“On November 17, leaders and members of Azerbaijani Popular Front Party as well as a group of activists of several other political organizations attempted to stage an unauthorized rally-march at the Alley of Martyrs on the occasion of the National Revival Day. As is known, it is prohibited to stage any mass event unauthorized by an appropriate executive body at places defined by the laws of the Republic of Azerbaijan, including places where official protocol events are held. However, despite the prohibition by law and several warnings, a group of activities – with the organization and direct participation of leaders of the aforementioned organizations – attempted to enter the territory of the Alley of Martyrs and stage a political event,” he said.The Presidential Assistant said that the event participants disregarded demands of law enforcement employees, who were trying to prevent the illegal mass event, and even put up resistance to police.
“As a result, 52 participants of the event were detained and taken to Sabayil District Police Station. After the case was investigated, police cautions were issued to 41 persons and they were released. 11 organizers and main participants of the event remain in custody and material about them was submitted to a court for consideration.”“I would like to note with regret that some local and foreign media, including social networks spread unchecked, biased and one-sided information on what happened, wrongly labeling the event as restriction of human rights and freedoms, including the freedom of assembly, freedom of speech and information, and political pluralism.”“I would like to reiterate that the law enforcement bodies tackled – as required by law – the illegal attempt to stage a rally and this has nothing to do with the violation of human rights and freedoms. It is maintenance of public order, not the issue of political affiliation which is the main criterion for police,” Ali Hasanov added.