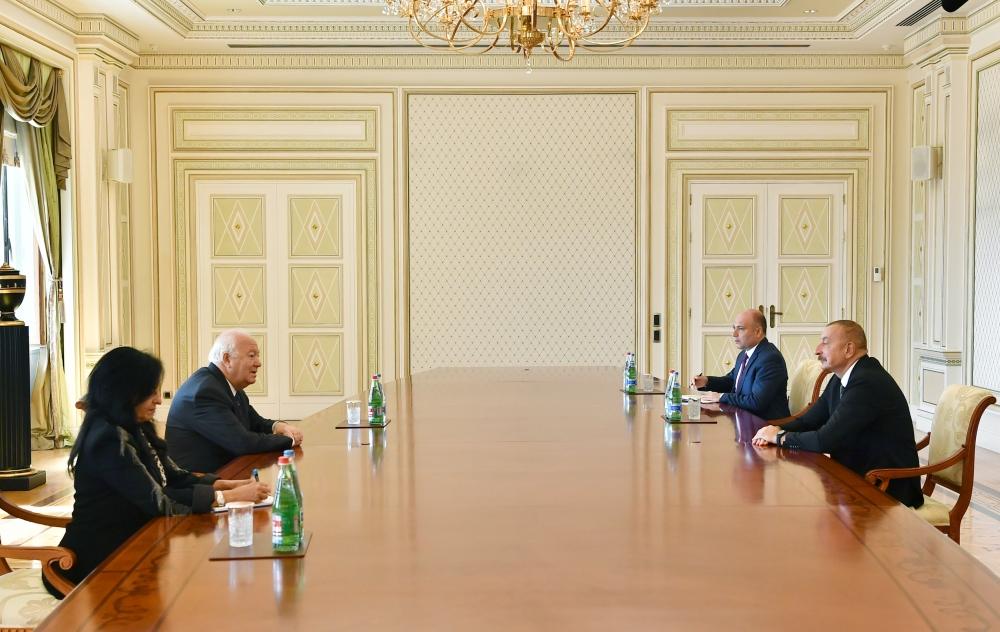 He made the remarks at a meeting with United Nations Alliance of Civilizations (UNAOC) High Representative Miguel Ángel Moratinos in Baku on June 23.

Aliyev stressed that Azerbaijan has to clear all Armenian-destroyed villages and cities of mines and simultaneously start building them.

“We have already accumulated all our efforts and mobilized our resources. Big infrastructure projects have already started. Probably you have been informed about that. We will rebuild all our lands, and I think we will demonstrate a unique experience in the world – from this kind of devastation to development and decent living standards for people,” he added.

The president stressed that Armenia planted 97,000 mines in Azerbaijan’s Aghdam region alone and that Baku managed to obtain from Yerevan mine maps only for Aghdam.

“There are hundreds of thousands of mines in other regions. They refuse to give us the maps, and we already had more than 100 casualties” he said.

The president stressed that over 30 people, including two journalists, were killed and over 100 civilians were injured in mine explosions after the end of hostilities in November 2020.

“Thank you for visiting those areas. This is really a sign of your sympathy and support for the people who suffered from war and the long-lasting occupation,” he added.

In turn, Moratinos thanked Aliyev for receiving him and ensuring an opportunity to review the work that the UN and Azerbaijan could do together.

The senior UN official said that during his visit to the liberated regions he witnessed something that he had never seen in his political and professional life.

“Nothing is left. Everything is completely ruined. How can one witness such a situation in the 21st century? Secondly, I think that my visit to Aghdam went well because your special representative showed me the plan for the future. This is a great vision, Mr. President. It is a great pleasure to see the roads, the busy people and the positive dynamics,” he said.

Moratinos stressed that Azerbaijan has always developed and this development will grow further.

“I have always considered myself a friend of Azerbaijan, and this time I am proud to be with you and to try to support your efforts, those of the Foreign Ministry and the Culture Ministry in my new capacity as the UN High Representative for the Alliance of Civilizations,” he said.

Earlier, Azerbaijan invited the UNESCO mission to visit the country’s war-affected territories in line with the 1954 Hague Convention “For the Protection of Cultural Property in the Event of Armed Conflict”.

In early May this year, the Azerbaijani Foreign Ministry said that hundreds of cultural institutions, 927 libraries with a book fund of 4.6 million, 22 museums and museum branches with more than 100,000 exhibits, 4 art galleries, 8 culture, and recreation parks, as well as one of the oldest settlements in the world in Fuzuli district – Azykh Cave, Shusha State Historical and Architectural Reserve have become victims of Armenian vandalism.

The scale of destruction in Azerbaijan’s formerly occupied territories suggests deep hatred and animosity against Azerbaijanis, with many experts describing these mass destructions as genocide.

Azerbaijan and Armenia resumed the second war after that latter started firing at Azerbaijani civilians and military positions starting September 27, 2020. The war ended on November 10 with the signing of a trilateral peace deal by the Azerbaijani, Russian and Armenian leaders.

The peace agreement stipulated the return of Azerbaijan’s Armenian-occupied Kalbajar, Aghdam and Lachin regions. Before the signing of the deal, the Azerbaijani army had liberated around 300 villages, settlements, city centres, and historic Shusha city. The Azerbaijani army declared a victory against the Armenian troops. The signed agreement obliged Armenia to withdraw its troops from the Azerbaijani lands that it has occupied since the early 1990s.