Amount of mutual investments between Azerbaijan and Turkey disclosed 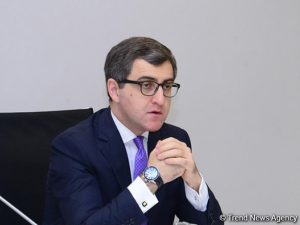 Azerbaijan has invested $14.3 billion in Turkey’s economy, of which $12.8 billion was invested in the oil sector, while $1.5 billion – in the non-oil sector, Trend reports citing acting president of the Azerbaijan Export and Investment Promotion Foundation (AZPROMO) Yusif Abdullayev as saying.

Abdullayev made the remarks at the Azerbaijan-Turkey business forum in Baku on Dec. 11.

Speaking about the recent reforms in the country, Abdullayev stressed that production and export of non-oil goods increased in the country thanks to the reforms.

“In particular, Azerbaijan supports entrepreneurs, assisting them in taking part in various exhibitions, by giving benefits, opening trade houses, appointing trade representatives to different countries and carrying out other measures,” he said.

He added that as a result of the reforms Azerbaijan ranked 25th in the World Bank’s Doing Business report.