Home / Politics / Arab media: The victory pulled off by Azerbaijan is the triumph of the Islamic World as well

Arab media: The victory pulled off by Azerbaijan is the triumph of the Islamic World as well 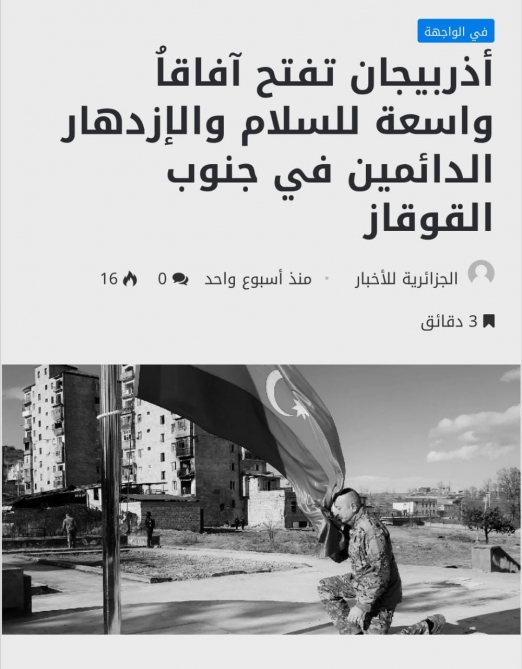 “The victory pulled off by Azerbaijan within 44 days is the triumph of the Islamic World. Because several attempts have been made to destroy Islamic values in the lands belonging to Azerbaijan for approximately 30 years. Azerbaijan also prevented this dangerous process,” said member of Azerbaijani Milli Majlis Konul Nurullayeva in her article published in the influential media outlets of Arabic countries.

The article headlined “Azerbaijan opens the door for sustainable peace in the South Caucasus” was broadcasted by 8 influential media outlets, including 4 in Egypt, 2 in Morocco, 1 in Algeria, and 1 in Iraq. This is also the first article published about Azerbaijan in the influential Moroccan newspaper Atayar.

Nurullayeva noted that the city of Shusha, the pearl of Karabakh, preserves its image as the cultural capital of both Azerbaijan and the Islamic World. “New mosques are being built, the sound of adhan is coming from Karabakh again, and no force will be able to stop it,” she said.

Recalling the 44-day Patriotic war ended with the victory of Azerbaijan last year, the author mentioned that a new reality of development has emerged in the South Caucasus region. She said that the projects implemented by Azerbaijan to improve prosperity in the region are appreciated by all the partners. Because each of these steps will support the normalization efforts in the region: “Azerbaijan itself has implemented four resolutions adopted by the UN Security Council in 1993, demanding the immediate, complete, and unconditional withdrawal of Armenian Armed Forces from the occupied territories of Azerbaijan. Thus, Karabakh and East Zangazur, which have been under Armenian occupation for almost 30 years, are finally liberated, and a new era of development has begun in this region. Azerbaijan has declared its readiness to make cooperation with Armenia in the new phase of peace. In other words, there is a historic chance emerged in the region for sustainable peace, integration, and cooperation. The positive development of this reality, which was formed after the Second Karabakh War, requires constructiveness from all parties, from especially Armenia.”

Moreover, the Azerbaijani MP also reminded that during the occupation, all cities and villages, including monuments of cultural and religious heritage were destroyed in the Karabakh region of Azerbaijan. She stressed that mosques have been destroyed and insulted on the grounds of hatred against all Muslims, as well as used as pig and cow stables. “Now, Azerbaijan is reviving devastated Karabakh and East Zangazur. Immediately after the liberation of the territories, the large-scale reconstruction work has begun and there are already preliminary results. Azerbaijan is building new cities and villages with its own financial resources. Azerbaijan is overcoming the disastrous consequences of urbicides, culturcide, and ecocides committed in Karabakh. This year, $ 1.3 billion has been allocated from the state budget for this purpose. In 2022, at least the same amount of money will be allocated for this work. The master plans of the liberated cities have been approved,” the author mentioned.

Touching upon the economic and political significance of Zangazur corridor, MP Nurullayeva recalled that the parties agreed to accelerate the delimitation and demarcation of borders during the meeting held between President of Azerbaijan Ilham Aliyev and Prime Minister of Armenia Nikol Pashinyan in Sochi on November 26 with the mediation of Russian President. In this context, she highlights the establishment of the bilateral commission on the delimitation and demarcation of the Azerbaijani-Armenian state border. “The main purpose here is to define the Azerbaijani-Armenian borders as soon as possible and sign a final peace agreement. At the Summit of the Economic Cooperation Organization held in Ashgabat on November 27, the President of Azerbaijan declared that new opportunities have emerged for the member states in the South Caucasus region. Thus, an irresistible process has already begun in the region that matches the realities defined by Azerbaijan and meets the interests of all parties. This process will bring peace to the region and prosperity to the peoples,” Nurullayeva emphasized.