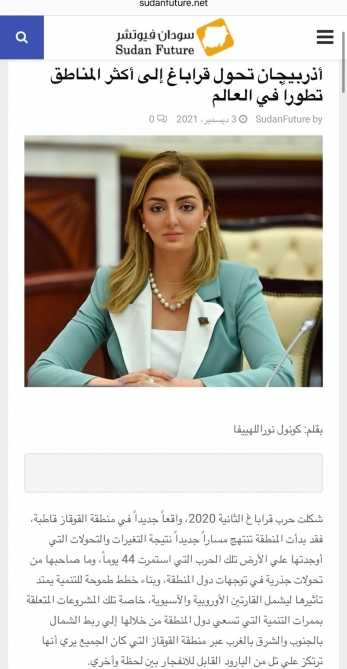 Member of Azerbaijani Milli Majlis Konul Nurullayeva’s article, highlighting the restoration work carried out in the Karabakh and Eastern Zangazur regions, has been published by thirteen influential media outlets of the Arabic countries, including Egypt, Algeria, Sudan, Iraq, and Yemen.

In her article, headlined “Azerbaijan turns Karabakh into the most developed region of the world”, MP Konul Nurullayeva informed readers about the results of the 44-day Patriotic War of Azerbaijan to restore its territorial integrity. “Azerbaijan ensured the implementation of 4 resolutions adopted by the UN Security Council in 1993 calling for the immediate, complete and unconditional withdrawal of the Armenian Armed Forces from the occupied territories of Azerbaijan. As a consequence, Karabakh and East Zangazur, which have been under Armenian occupation for almost 30 years, are finally liberated, and a new era of development has begun in this region,” the author mentioned.

Nurullayeva highlighted that all cities and villages, including monuments of cultural and religious heritage, have been destroyed in Karabakh region of Azerbaijan during the occupation. Mosques have also been destroyed, insulted, as well as used as pig and cow stables on the grounds of hatred against all Muslims. Now, Azerbaijan is reviving the devastated Karabakh and East Zangazur: “Immediately after the liberation of the territories, large-scale reconstruction work has begun and there are already preliminary results. Azerbaijan is building new cities and villages with its financial resources. New mosques are being built and the voice of adhan is coming from Karabakh again. President of Azerbaijan Ilham Aliyev has declared liberated Karabakh and East Zangazur as a green-energy zone.”

The article also provided information about Karabakh Fuzuli International Airport, which was built in just 8 months: “Despite the difficult landscape, Azerbaijan is building two more airports in Karabakh. The main point is that there has never been an airport in these areas and Azerbaijan is making the initiative in this field. The application of the “smart city” practice in the liberated Zangilan district – which is designed to ensure the highest level of welfare of citizens returning to the region after 30 years – is among these initiatives. Karabakh and East Zangazur, which have remained a gray zone for nearly 30 years, have now become attractive destinations for foreign investors. Foreign companies from around the world are actively involved in the reconstruction process and contribute to the development of Karabakh and East Zangazur which are full of natural resources”.