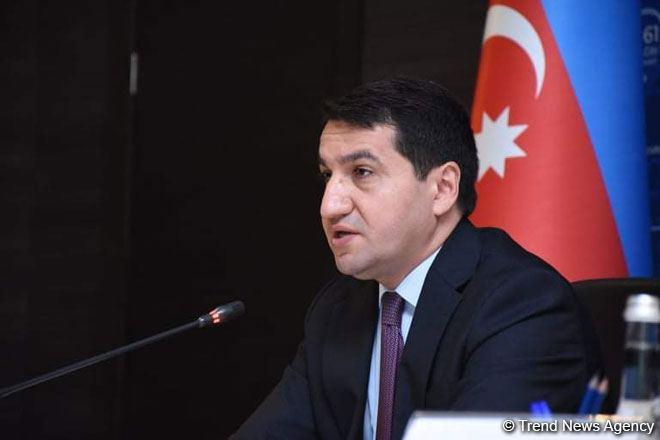 Presidential aide Hikmat Hajiyev has said that Armenia established a corridor to bring PKK members to the Azerbaijan’s occupied territories.

In an interview with the Turkish media, Hajiyev stressed that Azerbaijan had been sharing information about the presence of PKK terrorists and Armenia’s contact with the terrorist group.

“They established a corridor to bring the PKK into Azerbaijan’s occupied territories,” Hajiyev said, adding that there are also PKK camps in the area, while the tactics used by Armenia indicate a PKK presence.

“Forming tunnels in the region, digging ditches and the firing systems are all unique to the PKK. Azerbaijan has determined PKK presence in the front rows of Armenian fronts with regards to their movement, tactics and differences of appearance,” Hajiyev said.

He added that according to the latest intelligence from captured Armenian officers, some 200 PKK terrorists would cross into Nagorno-Karabakh from Armenia.

Hajiyev noted that all countries that do not see the PKK as a terrorist organization contribute to crimes against humanity.

“First of all, we don’t need such a thing. We have a very professional military. We also have enough reserve power,” he said.

However, he said foreign fighters from several countries including Syria, Lebanon, as well as the USA, Canada and France, in particular, were fighting among the ranks of Armenia’s armed forces.

Hajiyev urged countries, whose Armenian citizens have joined the war and are killing Azerbaijani civilians, to stop the slaughter of ordinary civilians.

Armenia is also using civilian airplanes, which is “against the rules of the International Civil Aviation Organization. They have attached missile systems to civilian airplanes. In addition, weapons and missiles are being sent in the name of ‘humanitarian aid,'” he said, noting that it was carrying arms on its official airplane as if it is on a formal visit.

“They kill Azerbaijani civilians with them. This also needs to be examined by the international media,” he said.

Meanwhile, in a detailed statement posted on his official Twitter account on 26 October, Hajiyev said that international media had distributed credible news, citing intelligence information regarding the deployment of PKK terrorists to Azerbaijan’s occupied city of Shusha and them being dressed in military attire used by the Azerbaijani armed forces.

“We wish to remind that most recently, Armenia had released an utterly unprofessional fake video regarding foreign mercenaries in uniforms of the State Border Service of the Republic of Azerbaijan, alleging that mercenaries were fighting on Azerbaijan’s side. With regret, we must note that some reputable media outlets have also chosen to refer to such fake information without fact-checking,” Hajiyev wrote on Twitter on 26 October.

Hajiyev described as suspicious a photo earlier released by the Armenian Defence Ministry depicting the Armenian defence minister together with Armenian soldiers, among whom one was dressed in the uniform of the Azerbaijani State Border Service.

“MOD of Armenia released a photo of Armenia’s defence minister together with the Armenian soldiers. A barefoot Armenian soldier sitting next to the minister, wearing a military uniform identical to the one used by the State Border Service of the Republic of Azerbaijan, has raised serious suspicions. Several minutes later Armenia’s Defence Ministry’s press service had deleted those photos from the official accounts,” Hajiyev tweeted.

He also added: “An Armenian soldier in the military uniform of the State Border Service of the Republic of Azerbaijan sitting next to Armenia’s defence minister is proof that the Defence Ministry of Armenia is overseeing the production of such Bollywood style fake movies,” Hajiyev said.

He said that the staging of the alleged murder of two Armenian military prisoners in the area of Hadrut District was also a product of the rich creative capability of Armenia’s Defence Ministry and its subordinate structures.

“It is very deplorable that BBC’s online resource, through an Armenian author, had allowed such fake facts to gain the spotlight. Armenia’s leadership and the criminal junta regime recognize no moral-ethical boundaries. The Armenian side may also dress the PKK terrorists and Armenian soldiers in military uniforms of the Armed Forces of the Republic of Azerbaijan, organize perpetration of military crimes against the civilian Armenian population and then mobilize all their propaganda resources, attempting to put the responsibility on Azerbaijan. In the meantime, the PKK terrorists, eliminated in combat, while dressed in military uniform of the Armed Forces of Azerbaijan, can allegedly be presented as mercenaries fighting on Azerbaijan’s behalf,” he said.

The presidential aide reiterated that ethnic Armenians were killed by Armenians themselves in Azerbaijan’s Sumgayit in 1988 in order to blame Azerbaijan for that.

“We recall very well the fact that in 1988. Armenia’s intelligence agencies, aided by the USSR’s Committee of State Security, through an Armenian criminal Eduard Grigoryan, had organized pogroms of the civilian Armenian population in Sumgait and later blamed Azerbaijan for that. We call on the Armenian civilian population in Azerbaijan’s occupied territories to remain vigilant against such potential provocations by Armenia’s armed forces and the criminal junta regime and stay away from military facilities. As the Commander-in-Chief President llham Aliyev stated it. Azerbaijan has no issue with the civilian Armenian population. We are ready to extend all the necessary humanitarian support, based on humanism principles and the Geneva conventions, to the civilian population and the Armenian servicemen willing to cross into the territories under the control of the Armed Forces of Azerbaijan,” Hajiyev said.

Previous Vusal Gasimli: “Industrial production in Karabakh will increase in the post-conflict period”
Next President Aliyev: Azerbaijan to avenge in battlefield killing of civilians in Barda