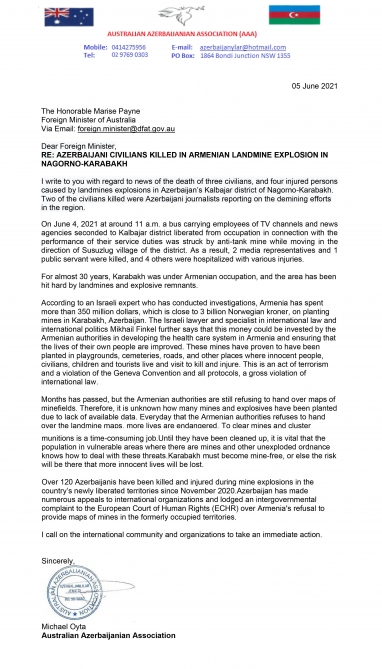 The Australian Azerbaijanian Association has issued a statement on the killing of Azerbaijani civilians by mines planted by Armenian separatists.

AZERTAC presents the statement signed by President of Australian Azerbaijanian Association Michael Oyta: “I write to you with regard to news of the death of three civilians, and four injured persons caused by landmines explosions in Azerbaijan’s Kalbajar district of Nagorno-Karabakh. Two of the civilians killed were Azerbaijani journalists reporting on the demining efforts in the region.

On June 4, 2021 at around 11 a.m. a bus carrying employees of TV channels and news agencies seconded to Kalbajar district liberated from occupation in connection with the performance of their service duties was struck by anti-tank mine while moving in the direction of Susuzlug village of the district. As a result, 2 media representatives and 1 public servant were killed, and 4 others were hospitalized with various injuries.

For almost 30 years, Karabakh was under Armenian occupation, and the area has been hit hard by landmines and explosive remnants.

According to an Israeli expert who has conducted investigations, Armenia has spent more than 350 million dollars, which is close to 3 billion Norwegian kroner, on planting mines in Karabakh, Azerbaijan. The Israeli lawyer and specialist in international law and international politics Mikhail Finkel further says that this money could be invested by the Armenian authorities in developing the health care system in Armenia and ensuring that the lives of their own people are improved. These mines have proven to have been planted in playgrounds, cemeteries, roads, and other places where innocent people, civilians, children and tourists live and visit to kill and injure. This is an act of terrorism and a violation of the Geneva Convention and all protocols, a gross violation of international law.

Months has passed, but the Armenian authorities are still refusing to hand over maps of minefields. Therefore, it is unknown how many mines and explosives have been planted due to lack of available data. Everyday that the Armenian authorities refuses to hand over the landmine maps, more lives are endangered. To clear mines and cluster munitions is a time-consuming job. Until they have been cleaned up, it is vital that the population in vulnerable areas where there are mines and other unexploded ordnance knows how to deal with these threats. Karabakh must become mine-free, or else the risk will be there that more innocent lives will be lost.

Over 120 Azerbaijanis have been killed and injured during mine explosions in the country’s newly liberated territories since November 2020.Azerbaijan has made numerous appeals to international organizations and lodged an intergovernmental complaint to the European Court of Human Rights (ECHR) over Armenia’s refusal to provide maps of mines in the formerly occupied territories.

I call on the international community and organizations to take an immediate action.”