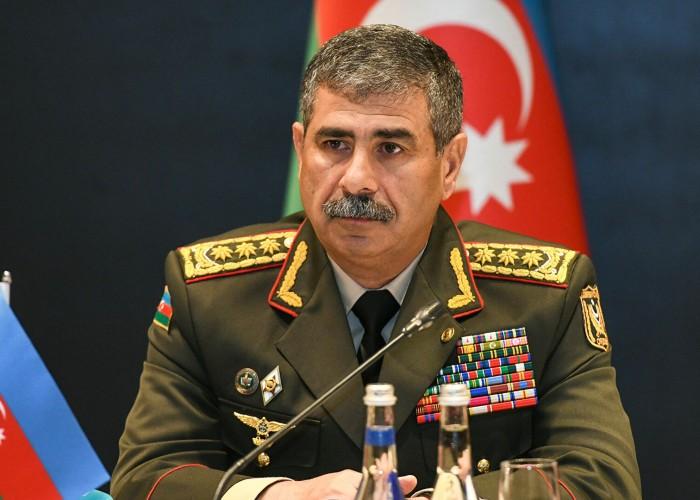 Azerbaijani Defence Minister Zakir Hasanov has paid his condolences to Turkey’s top brass over the killing of a Turkish serviceman during an anti-terror operation, the Defence Ministry reported on April 19.

“I am deeply saddened by the news of a serviceman of the glorious Turkish army becoming Shehid (martyr) in the area where the Armed Forces of fraternal Turkey were conducting the Operation Claw Lock (Penche Kilit). Your grief is our grief too,” the letter said.

“We are always close to the Armed Forces of fraternal Turkey and we support them with all our strength in the fight against terrorism. I pray to Almighty Allah for the repose of the soul of the serviceman, who became Shehid, share the sorrow and grief of his relatives, and express my deep condolences to his family. May Allah rest the soul of the Shehid in peace,” the letter added.

Operation Claw Lock was launched by the Turkish Armed Forces (TSK) in the early hours of April 18 with airstrikes by Turkish fighter jets in Metina, Zap and Avashin-Basyan regions in northern Iraq, where PKK has its training camps and other hideouts. The operation aims to neutralize terrorists and destroy their structures.

Turkish servicemen neutralized 26 terrorists in the north of Iraq within the framework of the anti-terror operation, the Turkish National Defence Ministry said.

During the anti-terror operation, four Turkish servicemen were injured and one (Combat Lieutenant Omer Delibas) was killed.

The Turkish army has long been conducting cross-border operations into northern Iraq under the Operation Claw Lock, but the current Claw Lock constitutes the biggest one of this series.