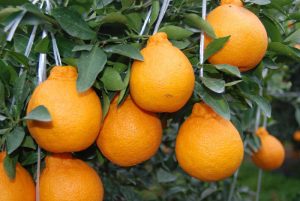 Hallabong, a rare citrus fruit, has been planted from more than 100 hectares (ha) of land in Azerbaijan’s Lankaran, the Lankaran City Executive Power told Trend.

The harvest time of this fruit differs from other citrus fruits: “Although other citrus fruits of the southern region are harvested in October-November, the harvesting of hallabong begins after December 25 and lasts for a month. Around 10-12 tons of the product was harvested from 15 ha of lands in 2016. An extra 18.7 ha of hallabong was planted in 2017, with 15.3 ha in other areas. This year there is an abundance of land and productivity.”

It is planned to increase the area of hallabong plantations in the future.

The rare citrus plant known as hallabong or dekopon is grown in only 5 countries, including Azerbaijan.

The fruit is originally from Japan. After Japan, its cultivation reached South Korea, eventually making its way to the US and Brazil. The fruit was brought to Azerbaijan and planted in Lankaran in 2015.

Hallabong’s weight ranges from 350 to 400 grams, with the fruit having a pear-like shape. It is rich in vitamins essential to the human body. The fruit has many health benefits, including helping preventing tooth loss and diabetes. It is also helpful in protecting the organism from various harmful substances and illnesses.