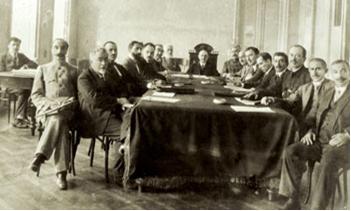 The period of the Democratic Republic, 1918-1920, was a distorted and scarce mentioned page in the history of Azerbaijan during the Soviet era. As archive documents on this period were always kept closed, researchers could not find out the real history, and those who did know about it deliberately described it as anti-national. But after Azerbaijan restored its independence, the “secret” and “top secret” archives were opened and a completely different view emerged. The new point of view is based on the history of the republic. The history that was slandered in the Soviet period turned out to be a proud and honourable one.

After Azerbaijan was divided between the Russian and Persian Empires in 1813 and 1828, the subsequent period saw the development of enlightenment and national consciousness, the national movement, begun by intellectuals, and the path to state independence. None of this 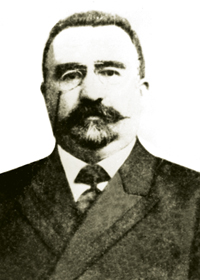 Alimardan bey Topchibashov (1862-1934) Chairman of Azerbaijan’s Parliament (1918-1920)
was straightforward. The path was strewn with the sacrifice of thousands of people, with imprisonment and exile from which no-one returned, and other suffering. The opportunity to achieve independence arose after the overthrow of Tsarism during the February Revolution and the formation of the Provisional Government in 1917. The seizure of power by the Bolsheviks, the overthrow of the Provisional Government, the later withdrawal from the war and the peace agreements changed the situation in the South Caucasus totally.
As the deputies elected to the All-Russian Constituent Assembly could not begin their work in the capital, the assembly was dissolved and on 23 February 1918 the Caucasian deputies formed the Seim (Parliament) of the Trans-Caucasus in Tbilisi. The Azerbaijani faction consisted of 44 persons. On 22 April in the same year the Seim declared the independence of the South Caucasus and formed the Trans-Caucasus Democratic Federative Republic. But as the result of internal disagreements, the Georgians left the Seim and declared their independence. On 27 May the Azerbaijani faction held a separate meeting and decided to declare independence. The faction declared itself the National Council of Azerbaijan. Mammed Emin Rasulzadeh, who was participating in negotiations between the Ottomans and the Trans-Caucasus in Batumi at this time, was elected in absentia chairman of the National Council. The National Council meeting on 28 May adopted the Declaration of Independence of Azerbaijan.

The territory of the Azerbaijan Democratic Republic is spoken about for the first time in the Declaration of Independence. The document says that Azerbaijan, located in the south and east Trans-Caucasus, is an independent state. The memorandum, submitted by the Azerbaijani delegation to the Paris Peace Conference in 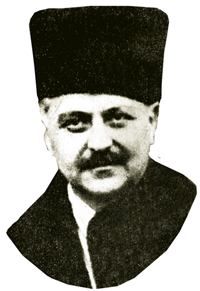 November 1918, sets out the territory of the republic as follows: Baku Province (Baku district, Javad district, Goychay district, Shamakhi district, Quba district, Lankaran district together with the Baku Circle); Yelizavetpol (Ganja) Province (Ganja district, Javanshir district, Nukha district, Arash district, Shusha district, Karyagi [Jabrayil] district, Zangezur district, Qazakh district [one-third of these territories which consisted of mountainous areas, were disputed between Azerbaijan and Armenia]); Irevan Province (Nakhchivan district, Sharur-Daralayaz district, Surmeli district, New Bayazid district, a part of Echmiadzin and Alexandropol districts); Tbilisi Province (Borchali district, a part of Tbilisi and Signakh districts); Zagatala region, Dagestan Province (a part of the Kur and Samur areas, also Derbent city and its suburbs together with part of Gaytar-Tabasaran Province). The borders in the north were determined by the River Samur and the Greater Caucasus range. The border with Georgia in the west was the same as the present borders of the Republic of Azerbaijan. The only discrepancy was the boundary between Borchali and Qazakh regions; this passed through Poylu. The border with Armenia went down to Goycha Lake in the south and, passing through the middle of the lake, went as far as the Turkish border, west of Bash Norashen, including Bazarkecher and Zangezur.

Only 8,700 km2 of the land where Azerbaijanis were living was disputed (Borchali, Garayazi and Signakh districts). The corresponding areas (7,900 km2) of Irevan, Echmiadzin, Surmeli and New Bayazid districts, which were subordinate to Armenia, were disputed by the government of Azerbaijan.
The territory of the republic was 113,900 km2 of which 97,300 thousand km2 were undisputed and 16,600 km2 disputed. The present territory of Azerbaijan is 86,600 km2. 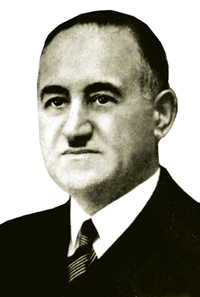 The document submitted to the Paris Peace Conference by the government of Azerbaijan showed that the population of the South Caucasus was 8,081,668 of which 4,617,671 lived in Azerbaijan. A total of 75.4 per cent, or 3,481,889 of the Azerbaijani population, were Azerbaijanis. The other ethnic groups had appeared as the result of the resettlement policies of Tsarism in different periods of history. Overall, 43.1 per cent of the population in the South Caucasus was Muslim.

Executive power was held by the government in Azerbaijan. The first prime minister was Fatali khan Khoyski. The government was based in Tbilisi from 28 May to 16 June 1918, in Ganja from 16 June to 17 September 1918 and in Baku from 17 September 1918 to 28 April 1920. The head of the first, second and third cabinets was Fatali khan Khoyski, and of the fourth and fifth cabinets was Nasib bey Yusifbeyli. 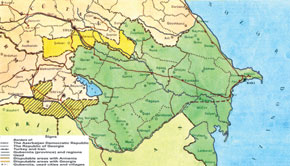 The government conducted an active domestic policy. The National Army was created in a short time. Azerbaijani was declared the state language and special attention was paid to culture. Baku State University was founded, schools, libraries and clubs were opened and a number of newspapers were published.

The main aim of the foreign policy of the Azerbaijan Democratic Republic was the promoting of the newly established state. The new government, therefore, conducted an active foreign policy from its inception. Information was sent to a number of European countries about the establishment of the new state. The government signed a friendship treaty with the Ottoman Empire in Batumi. The first step in foreign policy was to send a delegation, consisting of Mammad Emin Rasulzadeh and Aslan Saikurdski, to the Istanbul Conference, which was intended to be held between the Allied Powers (or the Entente Powers. The main allies were the French Third Republic, Imperial Russia, the British Empire, Italy and the United States.) and the South Caucasus republics. Alimardan bey Topchubashov was sent to Istanbul to create diplomatic relations with European countries.

After Central Powers (Germany, Austria-Hungary, the Ottoman Empire, and Bulgaria) were defeated in World War I, the Allies’ army came to Baku, led by Gen W.M. Thomson, on 17 November 1918. Despite the activity of the Armenian and Russian national councils against Azerbaijan, once Gen Thomson had familiarized himself with the situation, he declared that he respected highly the government of Azerbaijan and its prime minister and that its government would be the only legal power in the country until the formation of the new coalition government. 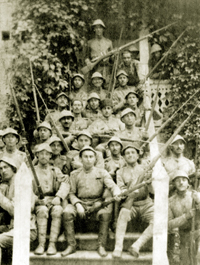 Infantry unit of the Azerbaijan National Army. Around 1919

One of the first steps of Azerbaijan was to determine the makeup of the delegation to the Paris Peace Conference. The delegation, led by Alimardan bey Topchubashov, left for Paris after holding a number of meetings with the representatives of different countries in Istanbul. The Azerbaijan issue was discussed at the Council of Allied Powers on 2 May 1919 for the first time. The delegation of Azerbaijan held several meetings. On 23 May a member of the British delegation, L. Mallet, met Topchubashov and they discussed political, military and economic issues. On 28 May Topchubashov met a member of the US delegation, Henry Morgenthau, during the first half of the day and President Woodrow Wilson during the second half. The memorandum of Azerbaijan was presented to the president of the USA. The government of the USA noted that cooperation with Azerbaijan would be effective.

In late June the British government adopted a decision on the withdrawal of troops from Azerbaijan. It was not possible to implement the Italian mandate in Azerbaijan in place of the British one. At the suggestion of the British foreign secretary, Lord Curzon, the independence of Azerbaijan was known de-facto in the assembly of the Supreme Council of the Paris Peace Conference on 11 January 1920. Following this, some countries opened their representative offices in Baku and some established diplomatic relations with Azerbaijan.

But, taking advantage of the international situation, Bolshevik Russia occupied Azerbaijan and put an end to its independence. The Azerbaijan Republic was substituted with Soviet Azerbaijan after 23 months of existence. 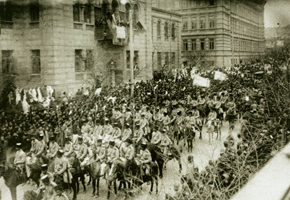 Previous Turkey and the South Caucasus: Prospects and Challenges for Cooperation
Next Karabagh’s roots go back to Caucasian Albania 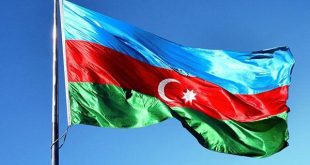 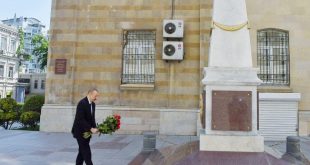 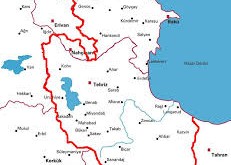