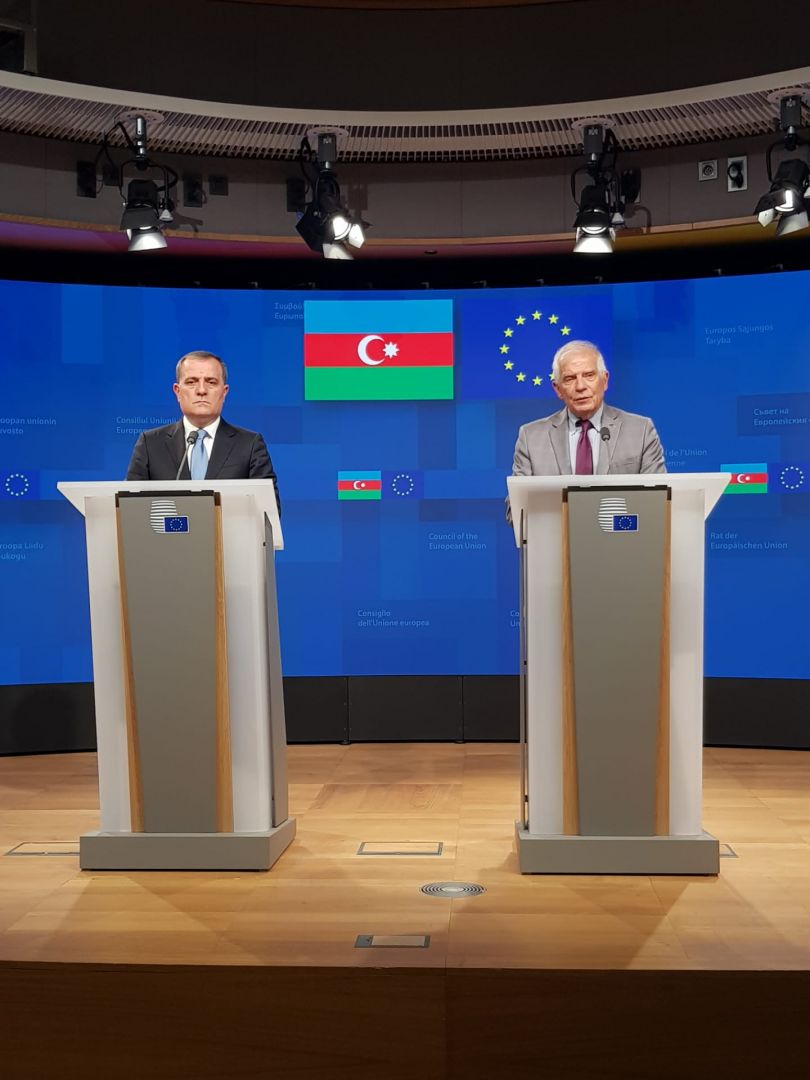 Azerbaijani Foreign Minister Jeyhun Bayramov and EU High Representative for Foreign Relations and Security Policy Josep Borrell have stated that both sides are in favor of concluding a comprehensive agreement soon, Azernews reports, per the ministry.

The sides made the remarks at the 18th meeting of the Azerbaijan-European Union Cooperation Council that was held under the co-chairmanship of Bayramov and Borrell in Brussels on July 19.

During the meeting, the officials discussed the Azerbaijan-European Union ties, particularly the present state of the comprehensive deal being negotiated between the two sides.

It was underlined that Azerbaijan is a trusted partner, and the relevance of the Memorandum of Understanding, signed by the Azerbaijani president and the president of the European Commission on July 18 was emphasized in this respect.

Borrell emphasized the importance of Azerbaijani natural gas in terms of supply security and price stability. Simultaneously, the potential for boosting Azerbaijan-EU engagement on multilateral platforms, as well as cooperation within the framework of the Eastern Partnership and measures to improve it were addressed.

Furthermore, a broad debate was conducted concerning the progress of normalization between Azerbaijan and Armenia. Bayramov called attention to the present condition of the normalization process, as well as Azerbaijan’s approach and vision in this regard.

It was noted that Azerbaijan is a supporter of a systematic and structured approach to the signing of a peace agreement. The position of Azerbaijan in the field of border delimitation, the opening of communications, as well as implementation of confidence-building measures with Armenia, was brought to attention.

In particular, the minister gave information on reconstruction work that was carried out by Azerbaijan. He emphasized that the meeting coincided with the return of the first group of IDPs, who were expelled from their homes, to Zangilan’s Aghali village.

Bayramov also brought up the problem of mine contamination of Azerbaijani territories, which is a major impediment to the rapid return of internally displaced people. He stated that Azerbaijani citizens are killed and maimed on a regular basis as a result of mine explosions, emphasizing the need for aid and collaboration with Azerbaijan in the demining field.

During the discussion, information was shared on other issues of the Azerbaijan-European Union agenda, such as cooperation in the fields of democracy, human rights, and rule of law, as well as initiatives and reforms carried out in Azerbaijan in the relevant areas.

Following the meeting, Bayramov and Borrell made press statements.

During a joint news conference, Bayramov emphasized the importance of the EU in the post-conflict period.

“We express our gratitude to the European Union, in particular to President Charles Michel, for mediating the normalization of relations between the two countries, which contributes to the development of a dialogue for peace, security, and prosperity in the South Caucasus,” Bayramov said.

He added that Azerbaijan highly appreciates EU support for demining activities in the liberated lands.

He underlined that Azerbaijan-Armenia ties should be normalized on the basis of mutual recognition and respect for sovereignty and territorial integrity within internationally recognized borders.

Furthermore, the minister noted that Azerbaijan and the EU are expanding the dialogue on renewable energy.

“The renewable energy development is among the priorities of Azerbaijan’s cooperation with the EU,” Bayramov said.

According to him, Azerbaijan plans to increase the share of renewable energy sources in overall power output from 17 to 30 percent by 2030.

“It’s potentially possible to deliver hydrogen through the Southern Gas Corridor to contribute to energy efficiency efforts,” he added.

According to him, the Trans Adriatic Pipeline (TAP) provides prospects for delivering fuels with exceptionally little climatic effect, such as hydrogen.

According to him, energy remains the foundation of Azerbaijan-EU cooperation and the Southern Gas Corridor aims to enter the alternative supply market.

Bayramov also met with EU Commissioner for Neighbourhood and Enlargement Oliver Varhelyi on the sidelines of the event.

“Good discussions took place with Oliver Varhelyi in the margins of 18th EU-Azerbaijan Cooperation Council meeting. We had a comprehensive exchange on Azerbaijan-EU partnership perspectives, strategic dialogue on energy, transport/connectivity and ways to further deepen economic cooperation,” Bayramov wrote on his Twitter account.