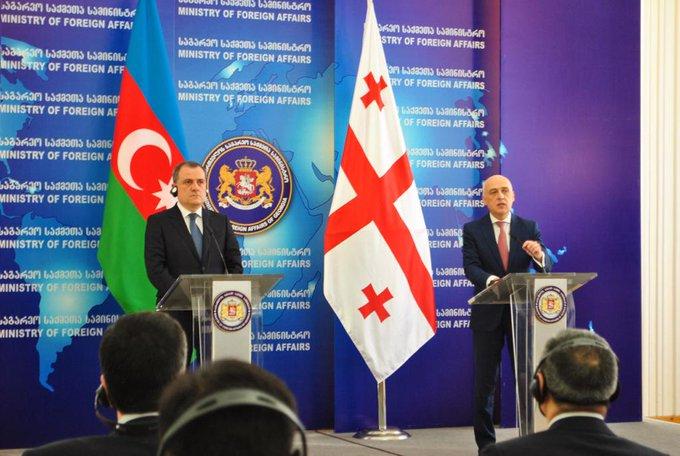 Azerbaijani and Georgian foreign ministers have discussed a range of issues on expanding cooperation during Foreign Minister Ceyhun Bayramov’s one-day visit to Georgia on September 24.

“Very fruitful discussions [were held] with my colleague Jeyhun Bayramov on key issues on Georgia and Azerbaijan agenda, including energy and transport projects and the strategic role they play in the region; trade-economic links, security challenges and peace and stability as a precondition for development,” Georgia’s Foreign Minister David Zalkaliani wrote in his Twitter account on September 24 after the expanded meeting with Minister Bayramov.

In another Tweet, Zalkaliani expressed hope that he and his Azerbaijani counterpart “can make a substantial contribution to the development of friendship and partnership between Georgia and Azerbaijan.”

A joint press briefing of the foreign ministers of Azerbaijan and Georgia is also being held in Tbilisi.

“Azerbaijan and Georgia has always supported each other’s sovereignty and territorial integrity within their internationally recognized borders. This support is clearly expressed on multilateral platforms as well,” Minister Bayramov said during the briefing, according to the Azerbaijani Foreign Ministry’s official Twitter page on September 24.

It should be noted that during his one-day visit to Georgia, Bayramov will meet with President Salome Zurabishvili, Prime Minister Georgie Gakharia, Minister of Economy and Sustainable Development Natia Turnava, Deputy Speaker Kakhaber Kuchava and parliamentary delegation.