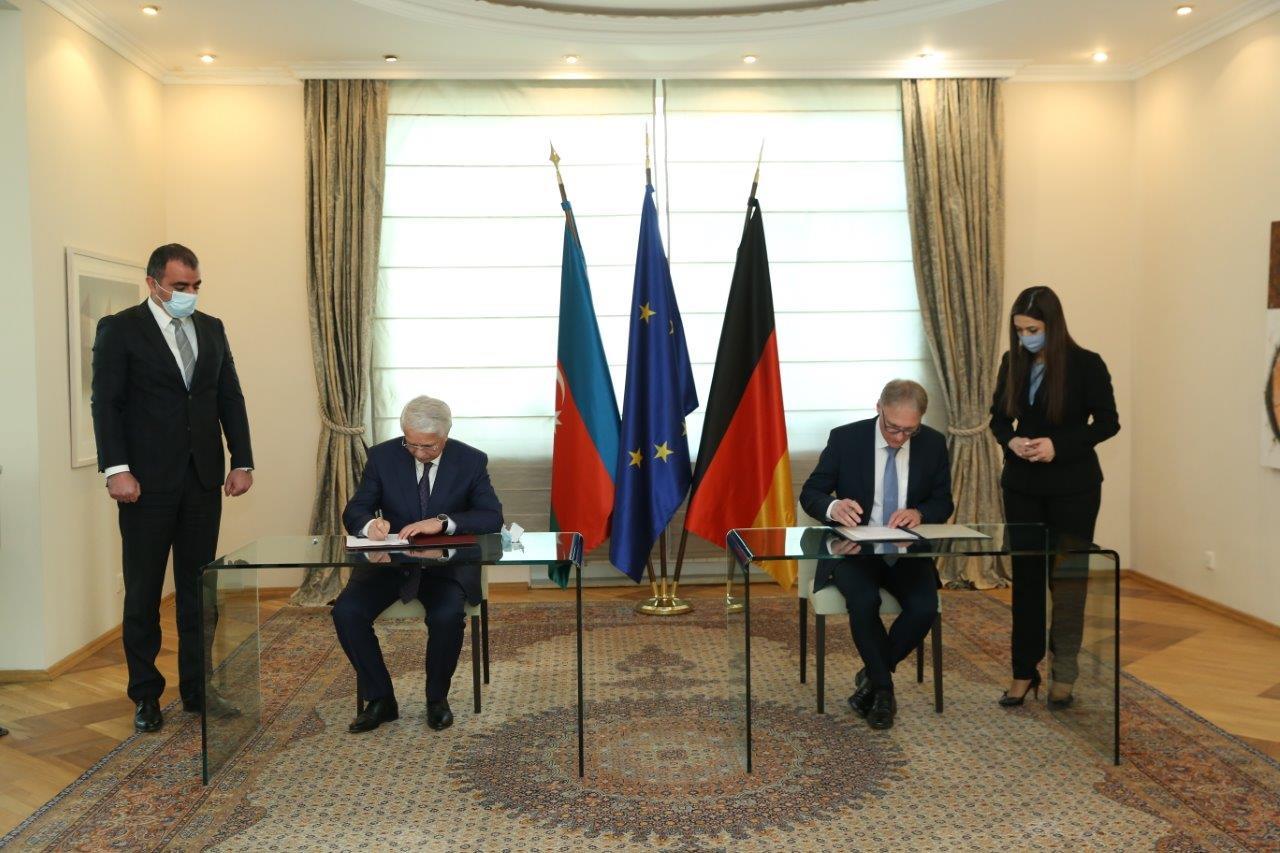 Azerbaijan and Germany have signed a Joint Declaration of Intent “On the continuation of cooperation in the field of professional development of managers in Azerbaijan’s business community”, Economy Ministry has reported.

The declaration was signed by Azerbaijan’s Deputy Economy Minister Sahib Alakbarov and German Ambassador to Azerbaijan Wolfgang Manig on March 2.

During the meeting, it was noted that cooperation in this area between the two countries has been carried out since 2009.

The document was signed for 3 years and provides for cooperation in the field of advanced training of Azerbaijani entrepreneurs and managers.

“The strengthening of the economic potential of Azerbaijan and the policy of diversification of the economy, as well as the creation of hundreds of new institutions for the production of products, have recently given positive trends to the expansion of foreign economic relations,” the Azerbaijani deputy minister said, Trend reports.

Deputy Minister underlined that Azerbaijan is the main economic and trade partner of Germany in the South Caucasus. Thus, trade turnover between the two countries amounted to $817.5 million, with export of $234.1 million and import of $58.4 million in 2020.

Touching upon a concept developed for the restoration and development of the Azerbaijani liberated territories, Alakbarov stressed Azerbaijan’s interest in attracting the German companies in large-scale restoration work within this concept.

“Azerbaijan is interested in attracting the German investment projects in the priority spheres of activity to achieve the economic growth in the post-pandemic period,” he added.

The program is being implemented by the Small and Medium Business Development Agency from the Azerbaijani side and the Society for International Cooperation from the German side.

The purpose of the program is to strengthen state support for the development of small and medium-sized enterprises in Azerbaijan, improving the theoretical and practical knowledge of entrepreneurs and managers in German training centers, familiarization with innovative technologies and management methods in German enterprises and creation of economic cooperation.

Additionally, during the implementation period of this program, more than 450 managers from Azerbaijan took part in it, having benefited from numerous graduation events, and about 40 contracts were signed between companies from the two countries.

It should be noted that the program is currently being carried out online due to the worldwide pandemic.

Moreover, the Ambassador discussed the current level of bilateral relations in the energy field and prospects for development with Azerbaijan Energy Minister Parviz Shahbazov during the meeting on March 2 as well.

During the meeting, the minister briefed the ambassador on the work done to expand the use of renewable energy sources in Azerbaijan, improve the legislation in this area and establish a green energy zone in the liberated territories.

In turn, the ambassador noted Germany’s experience in the field of renewable energy, and presented an invitation letter to the International Conference “Berlin Energy Transition Dialogue 2021”, scheduled for 16-17 March this year.

Participation in the reconstruction of Azerbaijan’s liberated territories

Furthermore, German Ambassador to Azerbaijan emphasized that German companies are considering the possibility of participating in reconstruction of Azerbaijan’s liberated territories, Trend has reported.

The ambassador noted that Germany followed the events related to Azerbaijan liberating of its territories from Armenian occupation and welcomed the signing of the trilateral statement of November 10, 2020, as the first step towards the development of relations between Azerbaijan and Armenia.

He added that as soon as progress on this issue becomes noticeable, German companies will be ready to participate in the reconstruction of the liberated territories, as well as in the process of demining Azerbaijani lands.

Additionally, the German-Azerbaijani Chamber of Commerce held B2B Meetings with a number of German companies within the framework of the first online delegation trip organized with the support of the Federal Ministry for Economic Affairs and Energy and in close cooperation with COMMIT Project Partners GmbH and VDMA on February 24-25.

German and Azerbaijani businesses engaged in the delegation trip are active in the oil and gas industry. The participants of the delegation had an opportunity to present their products and services while meeting relevant officials from the Azerbaijan Energy Ministry, SOCAR, BP, and other business representatives from Azerbaijani state institutions and private companies. Following this, more than 70 B2B meetings were held among the 30 companies involved in the business initiation trip.