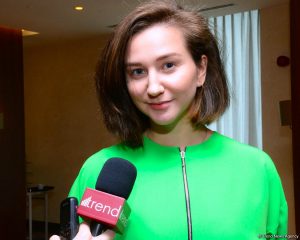 The Azerbaijan Gymnastics Federation is an example for other countries, Liubov Charkashyna, chairperson of the Athletes’ Commission of the International Gymnastics Federation (FIG), head coach of the Belarus team in rhythmic gymnastics, told Trend Nov. 30 on the sidelines of the FIG Executive Committee meeting in Baku.“If you want to develop sports with good international relations, you must move exactly as the Azerbaijan Gymnastics Federation does,” she said.Speaking about the importance of Baku for international gymnastics and sports in general, she said that Baku had already proved itself before the first European Games [held in 2015].“Everyone knows that whatever competition Baku hosts, the country will hold it at the highest level,” she noted. “This is all done at the expense of state support, and the state always does its best.”Baku will host the FIG Congress for the first time on Dec. 2-3. The representatives of national federations in FIG and members of the FIG Council will gather to participate in the Congress, which is the supreme body of the federation.Speaking about the work of the congress, Charkashyna noted that the Congress is ready for innovations.She further noted that this is the first term of FIG President Morinari Watanabe, and he, just like any new president, wants to introduce some kind of innovation.