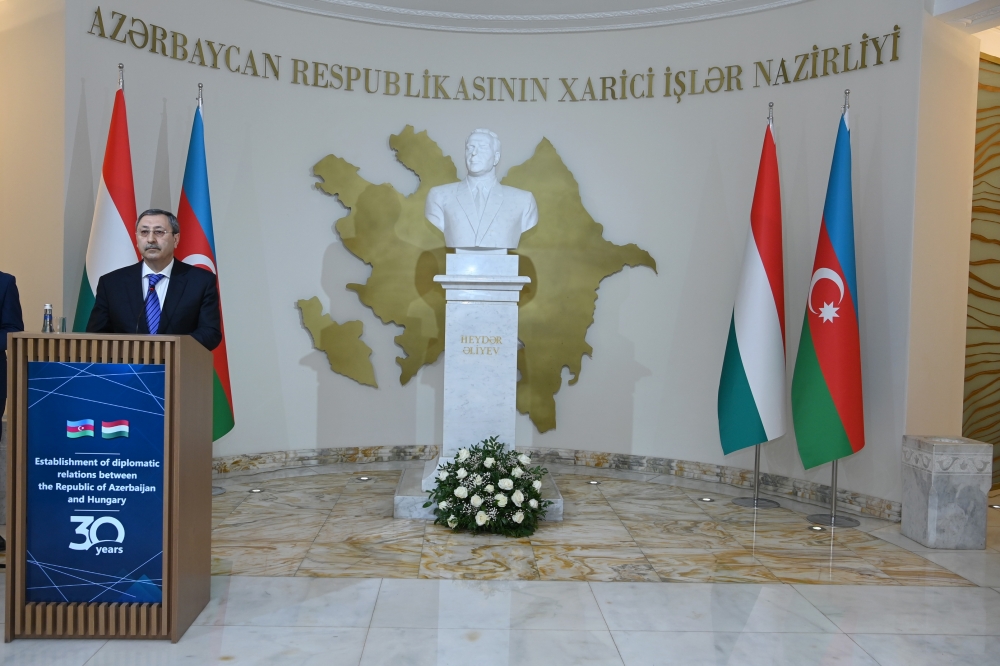 Azerbaijan`s Ministry of Foreign Affairs has hosted an event and exhibition on the occasion of the 30th anniversary of the establishment of diplomatic relations between the Republic of Azerbaijan and Hungary.

The event was attended by the leadership of the Ministry of Foreign Affairs of Azerbaijan, the Ambassador of Hungary to Azerbaijan, as well as embassy staff.

The event began with performing the national anthems of both countries.

Speaking at the event, Deputy Foreign Minister of Azerbaijan Khalaf Khalafov said that relations between Azerbaijan and Hungary have been developing on the basis of friendship and mutual respect for 30 years. Deputy Foreign Minister Khalaf Khalafov commended Hungary for supporting Azerbaijan’s just position during the Armenia-Azerbaijan Nagorno-Karabakh conflict, as well as in the 44-day Patriotic war, adding that now, at the post-conflict period, the country also participates in the reconstruction and restoration works in the liberated territories. Khalaf Khalafov also noted the existence of fruitful cooperation between the two countries both at the bilateral and multilateral levels within the framework of international organizations, especially within the Organization of Turkic States.

Hungarian Ambassador to Azerbaijan Viktor Szederkenyi said “we should be proud of the achievements in the development of diplomatic relations between Azerbaijan and Hungary over the past 30 years”. The Ambassador praised the cooperation between Azerbaijan and Hungary in the political, economic, humanitarian spheres and stressed that this is facilitated by the existing legal framework between the two countries, as well as contacts at the level of the leadership of both countries. Viktor Szederkenyi also conveyed his sincere congratulations to the participants of the event on the establishment of diplomatic relations between the two countries.

At the end of the event, the participants viewed a photo exhibition dedicated to the 30th anniversary of diplomatic relations between Azerbaijan and Hungary.