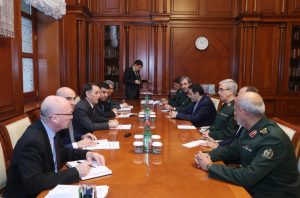 Prime Minister of the Republic of Azerbaijan Novruz Mammadov has met a delegation led by Chief of the General Staff of the Armed Forces of the Islamic Republic of Iran Mohammad Bagheri.

Prime Minister Novruz Mammadov stressed the importance of reciprocal visits in terms of expanding the relations and expressed confidence that Mohammad Bagheri`s visit to the country will contribute to the further development of cooperation in the field of defense.

Mohammad Bagheri hailed his visit and meetings held in Azerbaijan. Recalling Iran`s position on the Armenia-Azerbaijan Nagorno-Karabakh conflict, the Chief of the General Staff of the Armed Forces pointed out that Armenia occupied the historical lands of Azerbaijan and his country supports the peaceful settlement of the conflict within the territorial integrity of Azerbaijan.

Prime Minister Novruz Mammadov thanked Iran`s side for supporting Azerbaijan`s fair stance on the settlement of the Armenia-Azerbaijan Nagorno-Karabakh conflict.

Mohammad Bagheri said that the two countries` peoples have been bound together by great historical ties. He stressed the significance of the signing of the Convention on the legal status of the Caspian Sea in terms of creating new cooperation opportunities between the two countries.