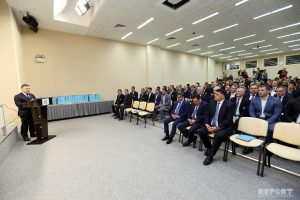 A reporting conference on the results of the Azerbaijan Judo Federation (AJF) activities in 2018 was held on December 28.

President of the Federation Rovnag Abdullayev attended the event at the Baku Olympic Stadium and noted that 2018 was remembered by significant events and achievements for Azerbaijani judo.

Secretary General Elmar Babanly said that 177 medals, of which 48 are gold, 46 are silver and 83 are bronze, were won in 39 international competitions. Babanly recalled that 755 athletes from 124 countries took part in the World Championship held at the National Gymnastics Arena in Baku, and the world championship was organized at a high level. The representative of the AJF stressed that Vugar Talibov won the gold medal at the III Summer Youth Olympic Games.

Speaking about the upcoming competitions in 2019, the Secretary General stressed that the Grand Slam tournament, dedicated to the memory of nationwide leader Heydar Aliyev, will be organized in May.

Then they touched upon the financial part. Following this, athletes and coaches who distinguished themselves during the year were awarded.

In conclusion, Rovnag Abdullayev said that 2019 will be difficult for Azerbaijani judo.

“By participating in all competitions, we must win maximum licenses. Our coaches must work to obtain licenses in all weight categories for the Summer Olympic Games 2020 in Tokyo. I am sure that Azerbaijan will be represented at a high level in the homeland of judo,” he said.

Judo is one of the most developed kinds of sport in Azerbaijan.

The Azerbaijani judo team is considered one of the best in the world.

Earlier, the International Judo Federation (IJF) released its ranking for January 2018, where ten Azerbaijani judokas were in Top 20 in their weight categories.

Judo is a martial art that was born in Japan, and it is now known around the world as an Olympic sport. Judo was established by combining jujitsu, a form of wrestling, with mental discipline. The roots of jujitsu lie in sumo, which has a long, long history.

In May 1882 Jigoro Kano was inspired by traditional forms of combat to create a method of physical, intellectual and moral education, which he named judo.

Initially considered as a personal defense system, judo is step by step recognized for its educational value, its benefits for the development of the body and the character.

Judo became an Olympic sport in the Tokyo Games in 1964, and thus became universal. The International Judo Federation today brings together 195 national federations and 5 continental unions.