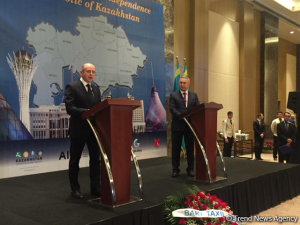 Kazakhstan and Azerbaijan have a solid potential for further mutually beneficial cooperation, Kazakh Ambassador to Azerbaijan Beybit Isabayev said at a reception in Baku on the occasion of Kazakhstan’s Independence Day on December 13.

“At the present stage, Kazakh-Azerbaijani relations are developing dynamically in all spheres, and the two countries have solid potential for further strengthening partnership and mutually beneficial cooperation,” the ambassador said.

Isabayev noted that over the years of independence, very close and friendly relations have been established between Kazakhstan and Azerbaijan, based on mutual trust and equality.

The ambassador also briefed the guests on the achievements of Kazakhstan in the socio-economic and political spheres.

In turn, Minister of Energy of Azerbaijan Parviz Shahbazov noted that during the years of independence, Kazakhstan under the leadership of President Nursultan Nazarbayev has achieved great success and has become one of the leading states in the region.

“By implementing important projects, Azerbaijan and Kazakhstan have turned their countries into key international energy and transport corridors,” the minister said.

Shahbazov expressed confidence that the friendly and fraternal relations, as well as cooperation and solidarity between the two countries, will continue.

The event was attended by members of the government, MPs, heads and employees of foreign diplomatic missions and international organizations, members of the Friends of Kazakhstan Club, activists of the Azerbaijan-Kazakhstan Republican Friendship Society named after Heydar Aliyev and representatives of the public.

The event featured various video materials about Kazakhstan, as well as dishes of the Kazakh cuisine.

Countries are interested in the intensification of cooperation in many areas, particularly logistics and infrastructure today. Azerbaijan and Kazakhstan, being the Caspian littoral states, are a natural bridge connecting the West and the East. Thus, the new stage of cooperation in the field of transport, energy and trade opens another door for Europe to the East.

In January-August 2018, the trade turnover between Kazakhstan and Azerbaijan increased by 2.1 times compared to last year, that is about $168 million.