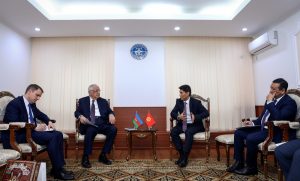 Azerbaijan`s Ambassador to Kyrgyzstan Hidayat Orujov has met with Kyrgyz Foreign Minister Chingiz Aydarbekov.The minister hailed the development of bilateral relations between the two countries in all areas. He said that the dialogue between presidents Ilham Aliyev of Azerbaijan and Sooronbai Jeenbekov of Kyrgyzstan is successfully developing, which is confirmed by a meeting of the two presidents as part of the 6th Summit of the Cooperation Council of the Turkic Speaking States.The ambassador expressed his confidence that relations between Azerbaijan and Kyrgyzstan will continue to develop successfully. Hidayat Orujov said a number of important events were held both in Bishkek and Baku. He noted that there is wide potential for Azerbaijan-Kyrgyzstan cooperation in a variety of fields, especially in economy.The FM praised the cooperation in the humanitarian area, as well as the participation of the Azerbaijani delegation in the 3rd World Nomad Games held in the Kyrgyz Republic this year.The sides also exchanged views on a number of other issues of mutual interest.