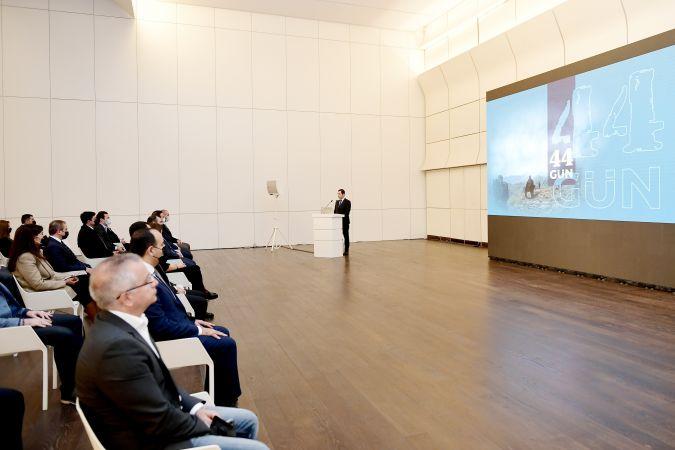 Azerbaijan has presented the www.44days.info website, which is dedicated to the 44-day Second Karabakh War.

The portal was created with the support of the Heydar Aliyev Foundation and conveys the chronicles of the 44-day Patriotic War in the Azerbaijani, Russian and English languages.

Addresses by the president, his interviews with various international media outlets, tweets, video-conferences, online meetings and phone conversations with presidents and officials of various countries, receptions held with delegations from local and international entities, statements by the Defence Ministry’s officials, articles published in the foreign media, as well as information about the offensive against Azerbaijan’s civilian population by the Armenian armed forces are reflected in the portal.

Each day of the Patriotic War and a trilateral statement setting out Armenia’s capitulation are given on the main page of the portal.

In the section entitled “Road to the 44-day War”, the events of July 2020 are given in consecutive order, and an analysis under the title “Why did the war happen?” is presented.

In the section “Offensive against civilians”, articles reflecting the killings of civilians as a result of missile launching and shelling towards cities and regions located far from the frontline, along with the intensive shelling of the Azerbaijani army’s positions, as well as the damage caused, are placed in a chronological sequence.

The military parade held in Baku on the occasion of the historic victory of Azerbaijan, a chronological sequence of the visits by President Ilham Aliyev and First Lady Mehriban Aliyeva to the territories liberated from occupation, including photo and video materials, are also presented to the site’s audience.

Moreover, a database describing the history of the Armenia-Azerbaijan, Nagorno Karabakh conflict, its legal and political aspects, crimes committed by Armenians against cultural heritage and natural wealth on the occupied territories, as well as the truths about the Khojaly genocide are given in the portal.

The peace agreement stipulated the return of Azerbaijan’s Armenian-occupied Kalbajar, Aghdam and Lachin regions and withdraw its troops from the Azerbaijani lands that it has occupied since the early 1990s. Before the signing of the deal, the Azerbaijani army had liberated around 300 villages, settlements, city centers, and historic Shusha city.