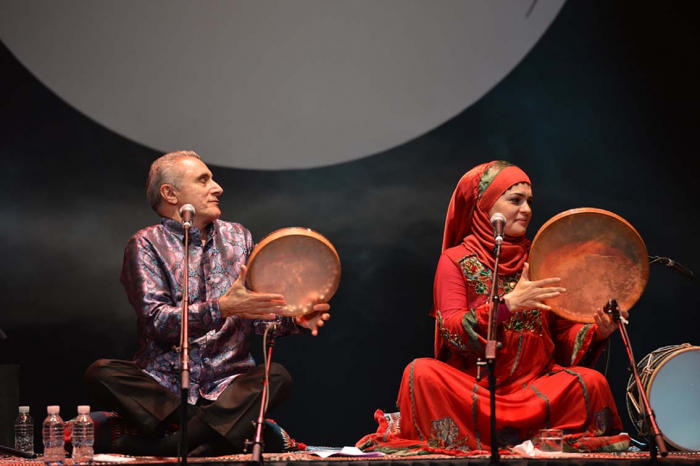 International Day of Azerbaijani Mugham and Silk Road countries’ Music has been solemnly marked in the country.

Every year, the day is celebrated by  all mugham singers and music lovers.

The decision to proclaim August 26 as the International Day of Azerbaijani Mugham was made by the administration of the Canadian city of Niagara-on-the-Lake and the leadership of the traditional annual Niagara International Chamber Music Festival 2010.

Thanks to the efforts of First Vice-President , UNESCO proclaimed Azerbaijani Mugham a “Masterpiece of the Oral and Intangible Heritage of Humanity” (2008).  The mugham art entered UNESCO Intangible Cultural Heritage Lists in 2008.

At the initiative of the Heydar Aliyev Foundation, the International World of Mugham Festival was held in country for the first time in 2009.

Music experts from other countries took part in symposium held within the festival.

The mugham modes are associated not only with scales but with an orally transmitted collection of melodies and melodic fragments that performers use in the course of improvisation.

The short selection of Azerbaijani mugham played in balaban, national wind instrument was included on the Voyager Golden Record, attached to the Voyager spacecraft as representing world music, included among many cultural achievements of humanity.

The 20th century was a turning point for the traditional art of mugham as Uzeyir Hajibeyov created “Leyli and Majnun” mugham opera, based on a synthesis of mugham and European classical music.

Next,  Fikrat Amirov introduced mugham for symphonic orchestra,  based on classical folk pieces and was performed by many renowned symphony orchestras all over the world.

Three major schools of mugham performance existed from the late 19th and early 20th centuries in Karabakh, Shirvan, and Baku.

In the late 1960s and 1970s, a completely new mugham style emerged in the country.

Vagif Mustafazade is considered the founder of Azerbaijani jazz-mugham , who blended the two music styles.

The mugham singer was awarded the International Music Council-UNESCO Music Prize, one of the highest international accolades for music in 1999.

International Mugham Center has been operating  in Baku since 2008.  Marvelous design of the building was inspired by the elements and shapes of the tar, national musical instrument used in performing mugham.

Equipments for the building were brought from Italy, Austria, France and Turkey. Over 2,000 glasses of different sizes were used in construction.

Among them are such projects as “Mugham Evenings”, “Evenings of ashug music”, “Pearls of ethnic music”, “Unforgettable”, “Evenings of Dastan”, Baku Summer Jazz Days and others.

The Mugham Center has recently signed a memorandum of cooperation with the Yunus Emre Institute.

The sides discussed issues of expanding activities and prepared a joint action plan between the International Mugham Center and cultural centers and music schools operating in Turkey.

The Mugham Center also reached an agreement with the Federal Directorate of Music and Festival Programs ROSCONCERT.

The document was signed within the framework of cooperation between Russia and Azerbaijan in the field of culture and art in 2021–2023.

The agreement is aimed at organizing humanitarian and educational projects within the framework of cultural exchange.

In January, the Mugham Center expanded ties with the Polish Baltic Philharmonic and agreed on holding joint cultural projects and concerts in the post-pandemic period.

Moreover, the Mugham Center has recently signed a memorandum on joint cooperation with Heydar Aliyev Palace.

The document was signed with the aim of developing cooperation and strengthening relations in the field of culture and art, promoting national spiritual values ​​and cultural heritage, preparing new joint projects, holding events, festivals and meetings.