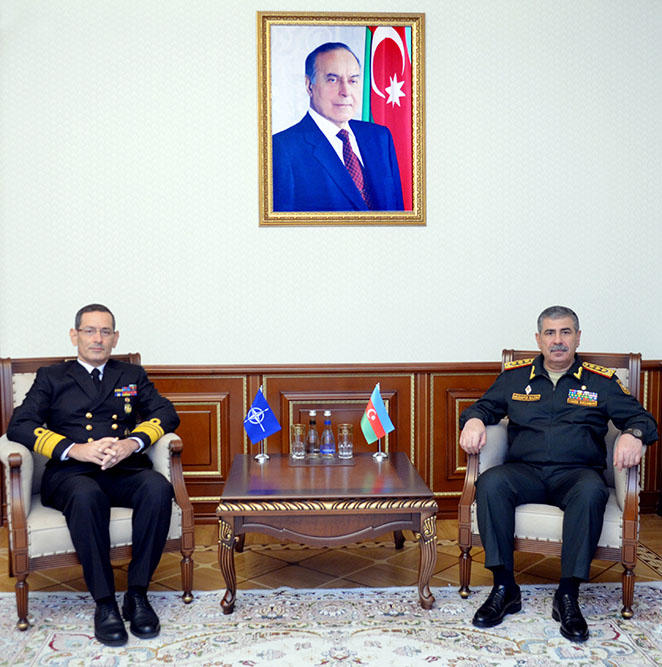 Azerbaijani Defence Minister Zakir Hasanov and a senior NATO official have discussed the further progress of bilateral military cooperation and the latest regional developments, the Defence Ministry reported on October 12.

At the meeting held in Baku on October 12, Hasanov briefed Chief of the Partnerships Directorate of the NATO Allied Powers Command Operations Rear Admiral Bulent Turan about the work carried out on the Azerbaijani territories liberated from Armenia’s occupation in late 2020 and the current situation on the Armenian-Azerbaijani state border.

In turn, Turan thanked Azerbaijan for its contribution to the Resolute Support non-combat mission in Afghanistan and stressed his commitment to the further development of the current military cooperation.

The sides also exchanged views on joint events held within the framework of partnership with NATO.

Valiyev noted that after the victory in the 44-day war the Azerbaijani army’s combat readiness and fighting spirit have significantly increased.

Speaking about the importance of cooperation, Valiyev underlined the positive results achieved by the Azerbaijan army units within the framework of the Operational Capabilities Concept (OCC).

Turan highly appreciated the activities carried out by the Azerbaijani servicemen in various areas of partnership with NATO.

The parties also exchanged views on the prospects of future cooperation with NATO, military, military-technical, military education, military medicine, and other issues of mutual interest.

Relations with NATO started in 1992 when Azerbaijan joined the North Atlantic Cooperation Council. This forum for dialogue was succeeded in 1997 by the Euro-Atlantic Partnership Council, which brings together all Allies and partner countries in the Euro-Atlantic area.

Bilateral cooperation began when Azerbaijan joined the Partnership for Peace (PfP) programme in 1994. Thanks to regular participation in PfP activities, Azerbaijan has been able to contribute actively to Euro-Atlantic security by supporting NATO-led peace-support operations.

Azerbaijan’s participation in the PfP Planning and Review Process (PARP) since 1997 has allowed NATO and individual Allies to assist Azerbaijan in developing selected units to improve interoperability with those of the Allies.

NATO and Azerbaijan started work on a jointly agreed Defence Education Enhancement Programme (DEEP) in 2008 to integrate NATO standards into the teaching methodologies and curricula of the country’s Professional Military Education (PME) institutions.

In 2018, Azerbaijan asked NATO to also involve the Military High School, a pre-commissioning school, in DEEP.