Azerbaijan Organ Music Festival to be held in capital 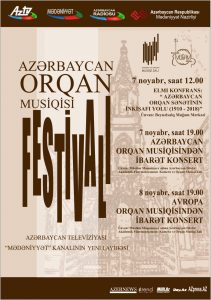 Azerbaijan Organ Music Festival will be held for the first time in Baku.

The festival will be held at the Azerbaijan State Academic Philharmonic Hall on November 7-8, Trend Life reported.

The Azerbaijan Festival of Organ Music is a joint project of Mədəniyyət TV, Azerbaijan Radio, Ministry of Culture and the International Mugham Center.

A scientific conference on the theme “The path of development of Azerbaijani organ art (1900-2018)” will be held at the International Mugham Center on November 7 at 12.00.

A concert of Azerbaijan’s organ music will be held on the same day at the Chamber and Organ Music Hall, at 19:00.

The festival will close with the concert of European organ music on November 8.

The compositions included in the festival program will be performed not only on the organ, but also tar. Famous mugham singers will perform on the stage.

The artistic director of the festival, director of Mədəniyyət TV, laureate of international competitions, honored artist of Azerbaijan Ramil Gasimov told Trend Life that  Azerbaijani academic music has a deep history. The Azerbaijani school of organ music has raised professional musicians in a short period of time. Gasimov stressed that the festival will contribute to the development of organ music in the country.

Note that the festival’s music editor is Riad Guliyev, concert program leader is Taira Yagubova, the compiler of the concert is Sabina Beilyarbekova, coordinator – Melek Velizade.