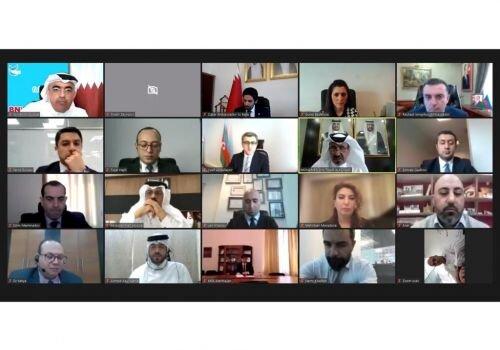 The development of economic cooperation between Azerbaijan and Qatar were discussed during the business meeting between Qatar’s Chamber of Commerce and Industry and Azerbaijan’s Export and Investment Promotion Foundation (AZPROMO), held in a videoconference format, AZPROMO reported.

Qatar’s Chamber of Commerce and Industry First Vice Chairman Mohammed Bin Ahmed Twar Al Kuwari stressed the importance of effective use of the existing potential to expand economic ties between the two countries.

Moreover, he shared his views on the development of economic cooperation and noted the role of business meetings in this sphere.

Abdullayev briefed the participants on the organization’s activities, expressed his opinion on joint efforts to expand relations between the organizations and to increase mutual investment. In addition, he invited businessmen to take advantage of the favourable economic environment created in Azerbaijan.

Additionally, bilateral meetings of businessmen were organized during the meeting

The meeting was attended by more than 70 representatives of companies operating in construction, industrial, food, agriculture, oil and gas and other fields.

It should be noted that bilateral cooperation between the two countries is successfully developing in various areas. Thus, the trade turnover between Azerbaijan and Qatar amounted to $2.4 million in 2020. Of the total turnover, export amounted to $1.2 million, while import to $1.1 million. In addition, Qatar was Azerbaijan’s third main trade partner among the Persian Gulf countries in January current year, with a turnover of $135,740.

Previous Azerbaijani defense minister expresses condolences to Turkish side
Next Azerbaijan, Germany to co-op on improving qualifications of managers