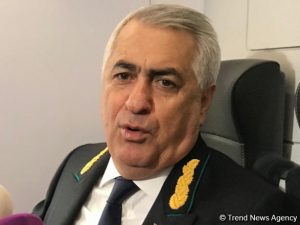 Next express trains in Azerbaijan may run in the directions of Gabala and Yalama, Chairman of Azerbaijan Railways CJSC Javid Gurbanov said, Trend reports Dec. 29.

“If construction work goes according to schedule, then the railway services to Gabala will be launched by the end of 2019. Technical capabilities allow this to be realized. The next destination will be Yalama,” he added.

The chairman of the company further added that a tender has already been announced for the construction of the Baku-Yalama railroad for the movement of express trains.

“Due to the rough land of the area, the process is expected to take two years,” Gurabnov said. “There will be underground and land crossings along the route.”

Commenting on the Baku-Ganja-Baku express train, which started its operation today, Gurbanov said that its test speed was chosen at 159 km/h.

“The speed is periodically changed. Now it is 130-135 km/h. The technical capabilities of the train allow to increase the speed up to 300 km/. When the project was implemented, the maximum speed was calculated to be 160 km/h. The speed is planned to increase in the future,” he added.

The Baku-Ganja-Baku express train departed from the Baku Central Railway Station for the first time today at 09:00.

Travel time of the train on the route is 4 hours 28 minutes.

The express train will also stop at Bilajari, Yevlakh and Goran stations.