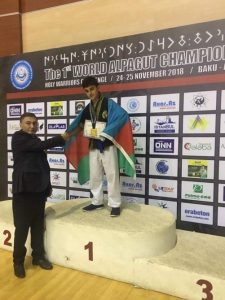 Azerbaijan have finished first in the overall medal table of the first World Alpagut Championship held in Baku.Turkey ranked second followed by Kazakhstan and Georgia.The tournament brought together nearly 500 athletes from 18 countries.Alpagut is a martial art with its canons, traditions and philosophy. The word Alpagut consists of two words- Alp which means ‘warrior’ and kulsal that means ‘saint’. These are saint soldiers who battled for the sake of national and universal ideals.The ancient sport which combines mixed Turkic martial arts consists of three systems: Aypara, Batur, and Jima. Alpagut technique involves the use of a knife, bow shooting, sword, and horse racing.