Azerbaijan, Russia and Iran set up working group on further development of transportations 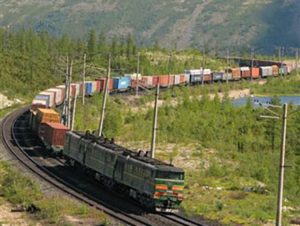 Azerbaijan, Russia and Iran created a joint working group on solution of the issues of further development of transportations between the countries and also a relevant system of monitoring.The issue was focused on within the Transport Week-2018 which took place in Moscow and discussed issues of transportation of goods between Russia, Azerbaijan and Iran, the Ministry of Transport of the Russian Federation said.The Deputy Minister of Transport of the Russian Federation Aleksey Semyonov, the Deputy Minister of Transport, Communications and High Technologies of the Republic of Azerbaijan Elmir Velizade and the Deputy Ministry of Road and Urban Development of the Islamic Republic of Iran Shahram Adamnejad participated in the meeting.The parties considered questions of transportation of goods between three countries, noted increase in their volumes and made certain decision on the issue discussed.