Azerbaijan to create network of wine and tea houses in Russia 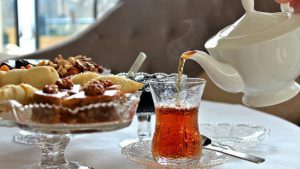 The opening of Trade Houses is one of the important activities carried out within the expansion of the export of Azerbaijani products and promotion of the ‘Made in Azerbaijan’ brand.

At present feasibility studies are being prepared, which will be carried out more actively after approval for the trade house, he noted.

“It is not excluded that the work will be carried out on the basis of public and private partnership, and we will involve our businessmen in this process. In the near future, we plan to open Azerbaijani wine and tea houses that are the boutiques where wine and tea products will be sold,” added Aliyev.

Speaking about the location of these houses,  Aliyev said that the work with real estate agencies is underway, proposals are being studied in this regard.

“It is planned to open wine and tea houses in Moscow, Yekaterinburg and St. Petersburg,” he said, adding, Azerbaijani tea products are represented in the Russian market for several years. As for wine products, unlike the cheapest wine, the local premium wine has just appeared a little earlier in the Russian market.

Azerbaijan has become the largest tea producer among the CIS countries. This applies not only to black tea varieties, but also to green ones. Nevertheless, the markets of foreign countries are still to be won by Azerbaijani tea, while it is popular only at home, despite its original taste.

For the first time, small tea plantations yielded crops at the end of the 19th century in the South Caucasus region of Azerbaijan, but the development of local tea growing started only in 1932.

In Azerbaijan tea is mainly grown in the Lankaran-Astara region. This is an area of some 5,330 sq. km. and includes Astara, Lankaran, Masalli, Lerik, Yardimli and Jalilabad regions.

Winery also  occupies one of the most important areas in the food industry of Azerbaijan.

Azerbaijan Wine Manufacturers and Exporters Association was established to coordinate activities between producers and exporters of wine and winery products with the support of the Export and Investment Promotion Foundation of Azerbaijan (AZPROMO) in 2016.

Production of wine and wine-making products in Azerbaijan exceeded 1 million decalitres in 2017, of which 375,000 decalitres were exported. Thus, wine products from the country were mainly sent to Russia (338,000 decals) and China (27,000 decals).

Azerbaijani Wine Houses are opened in foreign countries to promote national brands and exports of local products. The first wine house of Azerbaijan was opened in China this year.

At present, Azerbaijani trade houses are operating in Russia, Ukraine, Belarus, Latvia, Poland and China. It is planned to open up to 10 Trade Houses in 2019.