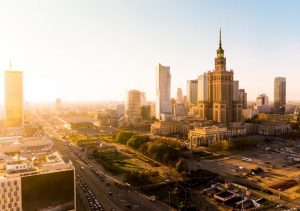 The introduction of local products of Azerbaijan to international markets is boosting the non-oil sector of the economy and strengthens business ties with foreign countries. Therefore, Azerbaijan is organizing a number of export missions to promote national products under the Made in Azerbaijan brand.

Azerbaijan will organize its next export mission to Warsaw on March 6-10, 2018.

The mission welcomes the entrepreneurs in food, alcoholic beverages, textiles and cosmetics spheres.

The exporters will be selected on a competitive basis to join the mission. The organizer of the competition, which will be held on February 7, is the Ministry of Economy and AZPROMO.

Launched in 2016, the Made in Azerbaijan brand envisages a large-scale promotion of local non-oil products in foreign markets.

Recently, Trading House of Azerbaijan opened in Warsaw in December last year to promote export of Azerbaijani products, organize sales of local products in Poland, and coordinate these activities with entrepreneurs.

The bilateral investment agreement and a treaty for avoidance of double taxation have been signed between the countries.

Foreign Trade Office of the Polish Investment and Trade Agency is operating in Baku, to support both Polish entrepreneurs present on the Azerbaijani market and Azerbaijani companies which consider to invest in Poland.

It should be noted that the Poland-Azerbaijan Business Forum is planned to be held in the first half of 2019 that will accompany the session of the Polish-Azerbaijani economic commission.