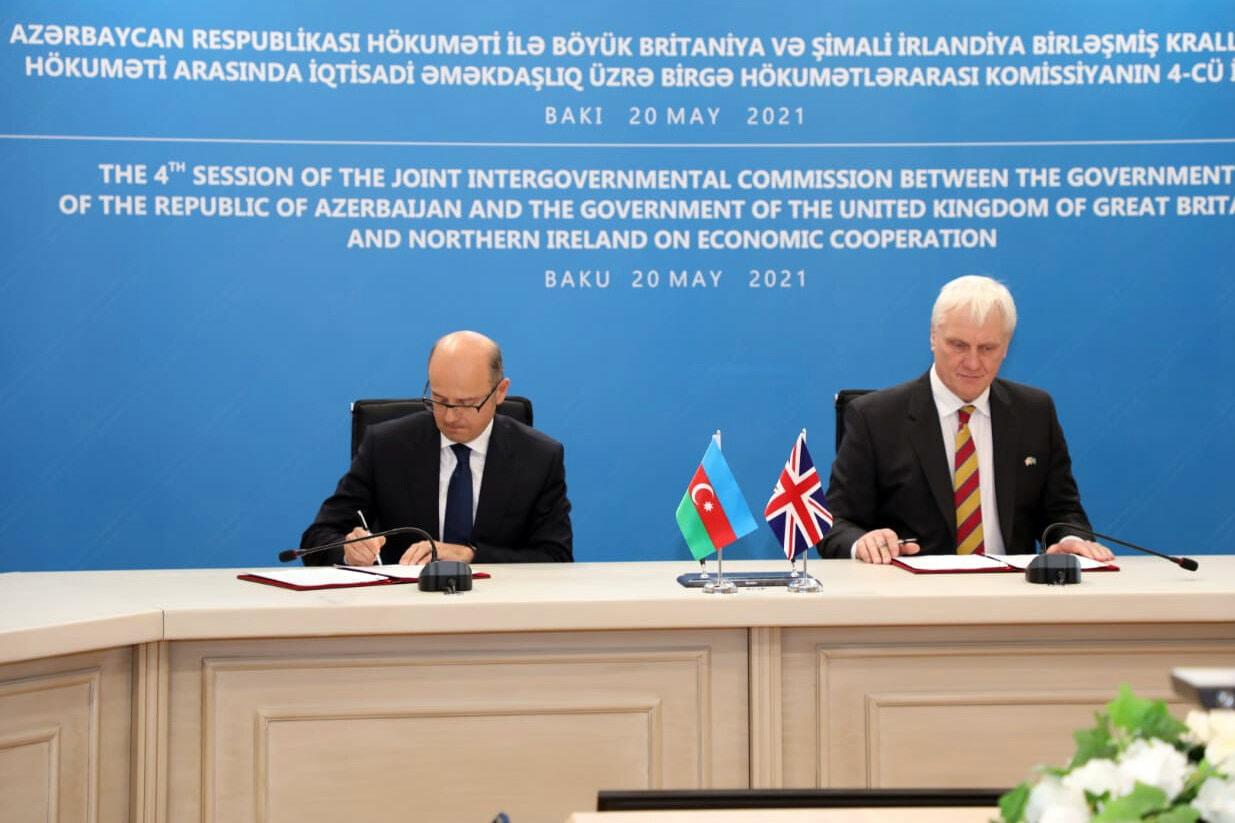 The governments of Azerbaijan and the United Kingdom of Great Britain and Northern Ireland have signed a memorandum of understanding on clean energy transition.

The memorandum was signed between Azerbaijan’s Energy Ministry and the UK and Northern Ireland International Trade Ministry during the fourth session of the Joint Intergovernmental Commission on economic cooperation held in Baku on May 20.

The document aims to strengthen cooperation between the two countries on energy issues and explore opportunities for solving the climate change problem. In addition, within the memorandum, cooperation in the fields of renewable energy, energy efficiency, low-carbon technologies, transition to the liberal energy market and electricity networks and exchange of information and experience will be held.

Moreover, the e-Government Development Center under the State Agency for Public Service and Social Innovations under the President of Azerbaijan and the Government Digital Service of the United Kingdom of Great Britain and Northern Ireland signed the protocol of intent in the field of digital government.

During the session, the parties stated that economic and trade cooperation between the two countries is successfully developing. It was noted that high-level mutual visits, signed documents and projects played a crucial role in the development of multilateral economic relations.

Azerbaijan’s Energy Minister and Co-chair of the Intergovernmental Commission Parviz Shahbazov noted that 30 years of successful cooperation between Azerbaijan and the United Kingdom in the oil and gas sector entered a new stage of development in line with the challenges of the global energy sector. He underlined that the energy sector accounts for $ 28.8 billion out of $ 30.6 billion of the United Kingdom’s investments to Azerbaijan`s economy.

Shahbazov stated that the strategic decision encouraging the development of renewable energy and green technologies and the realization of the national priority of the “clean environment and green growth country” open new opportunities for diversification of energy cooperation.

“Decarbonization of integrated energy and transport systems, renewable energy, energy efficiency, transition to the liberal energy market and our cooperation on electricity networks will contribute not only to the relations between the two countries but also to the energy transition process,” the minister added.

In turn, Parliamentary representative Under Secretary of State and Minister for Exports Graham Stuart expressed his country’s support for the development of existing relations between Azerbaijan and the UK in new directions.

“The UK has the world-class capabilities and expertise required to help lead the charge towards a cleaner, greener global recovery – from offshore wind to smart energy systems, sustainable construction to precision agriculture and from green finance to electric vehicle manufacturing,” he underlined.

“Hopefully, this, coupled with the government’s ambition to liberalise its energy market, reform enterprises will make Azerbaijan an even more attractive place to invest and do business,” Stuart added.

Representatives of the relevant agencies from both countries participated at the online meeting chaired by Energy Minister Parviz Shahbazov and Parliamentary representative Under Secretary of State and Exports Minister Graham Stuart.

During the meeting work done since the third session of the Intergovernmental Commission was reviewed. In addition, existing cooperation and opportunities for developing the relations between Azerbaijan and the UK in the fields of energy, renewable energy and energy efficiency, economy, agriculture, transport, communications, environment, education, health, tourism, culture and other fields were discussed at the meeting.

At the meeting, discussions were held on the development of the energy sector, investment climate, opportunities for SMEs, needs-based future planning in education, assessment of bilateral educational activities of both countries, an overview of Azerbaijan’s plans in smart cities/ application of artificial intelligence/ digital transformation of Azerbaijan and UK experience in this field, digital healthcare, reforms in the financial sector, as well as creative economy and creative education.