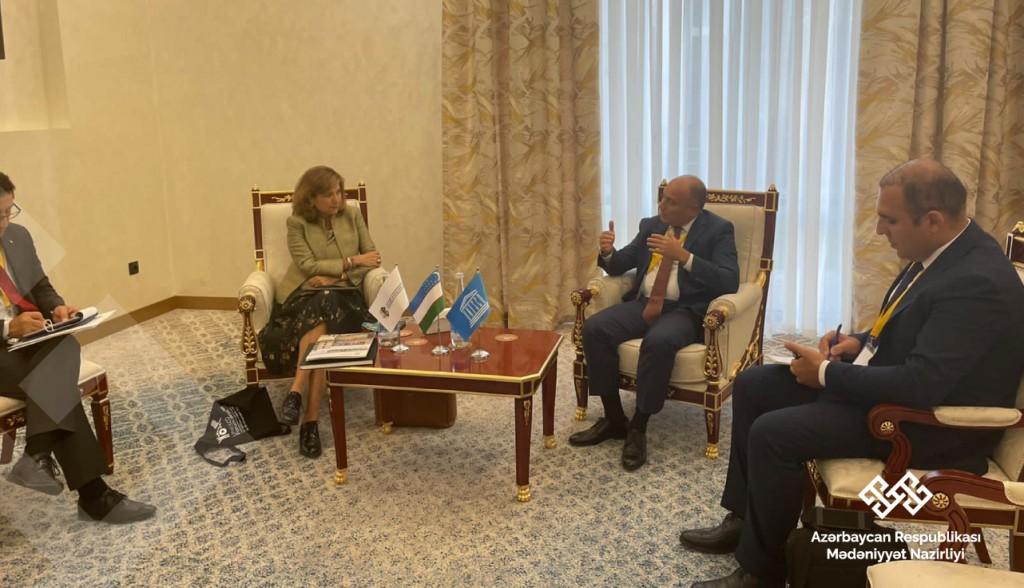 Azerbaijan and UNESCO have discussed the dispatch of a technical mission to territories in and around Karabakh liberated from Armenia’s occupation in 2020, the ministry reported on September 16.

During the discussions, Karimov touched upon the campaign Peace4Culture aimed at informing the world community about the situation in the Azerbaijani lands liberated from the Armenian occupation, including destroyed infrastructure and cultural genocide.

Earlier, Azerbaijan appealed to UNESCO several times over the dispatch of the UNESCO mission to record Armenia’s destruction of the Azerbaijani territories that it had occupied for almost three decades.

Many historical monuments were seriously damaged or destroyed as a result of the Armenian aggression.

Monuments, museums, archival funds belonging to the Azerbaijani people were plundered as well.

Over 700 historical and cultural monuments registered by the state before the Nagorno-Karabakh conflict were looted, including the 11 and 15-span Khudaferin bridges in Jabrayil, Ganjasar and Khudavend sanctuaries in Kalbajar, the mausoleum in Aghdam’s Khachin Turbetli village, the Azykh cave in Fuzuli as well as the Shusha state historical and architectural reserve as a result of Armenian vandalism.

Other spheres of cooperation

Karimov and Ramos also focused on Azerbaijan’s cooperation with UNESCO in the field of social sciences and humanities.

Speaking about the history of cooperation between UNESCO and Azerbaijan, Karimov said that Azerbaijani First Vice-President of Azerbaijan and UNESCO Goodwill Ambassador Mehriban Aliyeva had an exceptional contribution to these ties.

The minister informed Ramos about the Baku Process known as a major platform for inter-religious, intercultural dialogue initiated by President Ilham Aliyev in 2008.

He noted that the UN Alliance of Civilizations and UNESCO are the main partners of the World Forum on Intercultural Dialogue in Baku. The UN secretary-general reports praised the Baku Process as a global platform that includes intercultural dialogue.

He stressed that Azerbaijan attaches great importance to cooperation with the countries located on the Silk Road, and considers as important the role of this ancient road in modern development.

The two officials also discussed gender equality, cooperation in the field of youth, as well as a partnership with the Youth Forum held by UNESCO.

Azerbaijan and UNESCO have been enjoying successful cooperation since 1992.

In 2003, the parties signed the framework agreement on cooperation in the areas of culture, science, education, and communication, which allowed Azerbaijan to become one of the donors of UNESCO.

Many Azerbaijani cultural sites have been included in UNESCO’s World Heritage List.

Icherisheher (Old City), Maiden Tower, and Shirvanshah’s palace were included in the UNESCO World Heritage List in 2000, while since 2007 the Gobustan National Historical-Artistic reserve was also listed among these heritages.

Shaki, an important city at the crossroads of the historic Silk Roads was inscribed on UNESCO’s World Heritage List during the 43rd session of the World Heritage Committee held in Baku.

In 2017, UNESCO recognized Azerbaijan’s dolma as the Intangible Cultural Heritage of Humanity.

Art of crafting and playing with kamancha, presented jointly by Azerbaijan and Iran, was also inscribed on the UNESCO Representative List of the Intangible Cultural Heritage of Humanity.

Moreover, the Pomegranate Festival, Art of miniature were inscribed in UNESCO Representative List in December 2020.

Previous Coordination Headquarters eye effective fulfillment of tasks in Karabakh
Next PM Irakli Garibashvili: Azerbaijan is not only a neighbor but also a brotherly country for Georgia