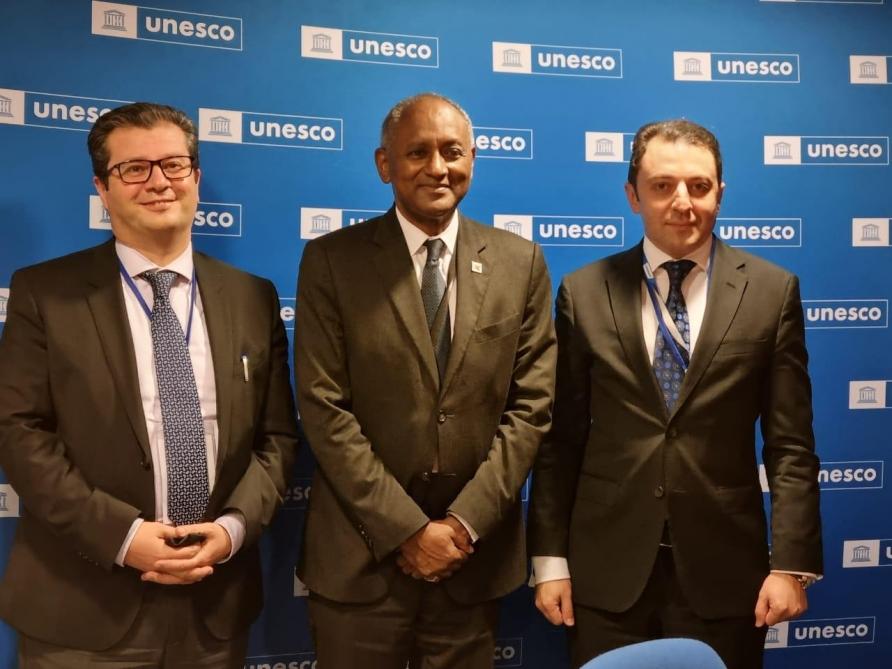 Azerbaijan and UNESCO will celebrate the 30th anniversary of partnership.

The decision was announced at a meeting between Deputy Foreign Minister Elnur Mammadov and the Assistant Director-General for Priority Africa and External Relations of UNESCO Firmin Edouard Matoko at the UNESCO General Conference, Azertag reported.

Mammadov stressed the role of the First Vice-President of Azerbaijan, UNESCO Goodwill Ambassador Mehriban Aliyeva in the development of Azerbaijan-UNESCO ties,  her contributions to the organization and its  projects.

He also spoke about the liberation of the Azerbaijan’s territories from the Armenian occupation which lasted for almost three decades. Elnur Mammadov pointed out that numerous cultural monuments were completely destroyed on these territories as a result of the Armenian vandalism.

In his speech,  the Deputy Foreign Minister touched upon Azerbaijani chairmanship in the Non-Aligned Movement and UNESCO II Election Group.

He pointed out that Azerbaijan has always been committed to its obligations.

In his remarks, Firmin Edouard Matoko said that Azerbaijan is one of the main partners of UNESCO.

Speaking about educational projects in Africa, Matoko stressed the importance of Azerbaijan’s contribution in this field, in particular,  assistance in training and education management.

Azerbaijan’s Permanent Representative to UNESCO.Elman Abdullayev underlined that Azerbaijan supports the Khiva Process and the Biennale of Luanda within the Baku Process. He said that the country will be represented at the Luanda Biennale.

Azerbaijan and UNESCO have been enjoying successful cooperation since 1992.

In 2003, the parties signed the framework agreement on cooperation in the areas of culture, science, education, and communication, which allowed Azerbaijan to become one of the donors of UNESCO.

Many Azerbaijani cultural sites have been included in UNESCO’s World Heritage List.

Icherisheher (Old City), Maiden Tower, and Shirvanshah’s palace were included in the UNESCO World Heritage List in 2000, while since 2007 the Gobustan National Historical-Artistic reserve was also listed among these heritages.

Shaki, an important city at the crossroads of the historic Silk Roads was inscribed on UNESCO’s World Heritage List during the 43rd session of the World Heritage Committee held in Baku.

In 2017, UNESCO recognized Azerbaijan’s dolma as the Intangible Cultural Heritage of Humanity.

Art of crafting and playing with kamancha, presented jointly by Azerbaijan and Iran, was also inscribed on the UNESCO Representative List of the Intangible Cultural Heritage of Humanity.

Moreover, the Pomegranate Festival, Art of miniature were inscribed in UNESCO Representative List in December 2020.