Azerbaijan on the way to progress and development

Today Azerbaijan is headed by Ilham Aliyev who worthily carries on the political course laid down by Heydar Aliyev. He is not only the elected president of the independent state of Azerbaijan, but also the new leader of all the Azerbaijanis living across the world. His leadership is a true embodiment of the willpower and resolution of the Azerbaijani people and manifestation of the strength of Heydar Aliyev’s insightful forethought. Gaining a firm political standing as well as deserved respect and influence in Azerbaijan through his painstaking and dedicated work, Ilham Aliyev has also achieved wide recognition in international political arena.

Ilham Aliyev is the son of Heydar Aliyev. He’s a professional politician. He has graduated from the Moscow State Institute of International Relations in 1982. After getting his post-graduate degree, Ilham Aliyev started his scientific-pedagogical career as a professor at the same institute. In 1985 he was conferred degree of a doctor for history. In 1991 he started working as the general manager of the “Orient” company in Moscow. In 1994 he was appointed the vice-president of the State Oil Company of Azerbaijan Republic for foreign economic relations. He was promoted to the post of first vice-president of the State Oil Company in 1997. Having worked as the Prime Minister of Azerbaijan as well, he was a close associate and collaborator of Heydar Aliyev.

Ilham Aliyev has worked closely with Heydar Aliyev on the formulation and realization of the oil strategy in Azerbaijan. He has played an enormous role in the augmentation and enhancement of this strategy and preparation of the various projects in this regard. Discharging his diplomatic duties devotedly, Ilham Aliyev has contributed a lot to the creation of incentives for the large-sized investment in the oil industry of Azerbaijan. During his tenure as the vice-president of the State Oil Company, Ilham Aliyev has rendered invaluable services to his country by taking an active part in the political and state-building processes such as implementation of economic reforms in Azerbaijan, establishment and expansion of the bilateral economic- cultural relations with the foreign countries, integration of Azerbaijan to the world, completion and effectuation of oil contracts with the accredited oil companies of the world on joint exploration of the oil-gas fields as well as conclusion of the much-awaited contract for exportation of the Baku oil to the world through construction of Baku-Tbilisi-Jeyhan oil pipeline. As a result of the consistent execution of the oil strategy worked out by Heydar Aliyev and actualized by Ilham Aliyev, during the years of 1994-2000, the foreign companies have granted 800 million USA dollars additional benefit to Azerbaijan. More than 30 thousand people have been provided with new jobs in oil industry due to the large-scale foreign investment in this sector.

Ilham Aliyev is the leader of the New Azerbaijan Party as well. As the leader of the main political party of Azerbaijan, Ilham Aliyev plays an essential role in the state-building processes of democratization, legalization and secularization of the country. He had been elected the vice-chairman of the Party in I Congress held in 1999 and the first deputy of the Party in the II Congress held in 2001. Fulfilling the responsibilities and obligations if this important task dutifully, today Ilham Aliyev works industriously to mobilize the country’s economic and intellectual resources for the speedy growth and development of the newly-founded independent state of Azerbaijan. The election campaign of the New Azerbaijan Party for the parliament elections of 2000 was steered by Ilham Aliyev himself. It was expressly because of the conscientious guidance of Ilham Aliyev that the New Azerbaijan Party won the parliament elections with overwhelming supremacy and gained the majority of seats in the National Assembly of Azerbaijan.

Following the elections, Ilham Aliyev worked tirelessly and vigorously to serve the national interests of Azerbaijan in the best possible way. During this period, he spent most of his time among the ordinary people trying to find out about their problems and bring a feasible solution to them. He showed a special concern for the underprivileged and deprived members of the community as well as refugees and displaced people. His genuine attitude towards creation of the socially considerate environment for the disabled people impaired in the Karabakh war is a lucid indication of his unswerving love and affection for Azerbaijan. The rewarding projects carried out in Karadagh and some other regions of the country at this period illustrate another aspect of the extensive and versatile activity of Ilham Aliyev as the Member of Parliament.

As a member of the Permanent Commission of International and Inter-parliamentary Relations of the National Assembly, Ilham Aliyev worked thoroughly at the Parliament Assembly of the European Council.

As the head of the Permanent Delegation of Azerbaijan at the Parliament Assembly of the European Council, Ilham Aliyev worked assiduously and purposefully to bring the realities of Azerbaijan into light. As a result of Ilham Aliyev’s spirited and strong-minded standpoint with regard to the issues of national interest, European countries gradually came to acknowledge and accept the international position of Azerbaijan. It was namely the cogent and forceful speeches delivered by Ilham Aliyev at the European Council that compelled the European countries to evaluate the conflict of Nagorno Karabakh impartially and denounce occupation of the Azerbaijani lands by the Armenian aggressors as the contravention of inviolability of the territorial integrity of Azerbaijan. Ilham Aliyev has played an enormous role in imparting the actual facts about the Nagorno Karabakh conflict to the Europe which has produced a fair assessment of the situation among the Western states. Due to his inexorable and untiring efforts, Armenia was finally recognized as an occupier and aggressor country. During this period, Ilham Aliyev worked indefatigably to lay the Armenian terrorist acts bare to the world community and achieve its condemnation as a part of international terrorism by providing sound substantiation for the horrible crimes committed by the Armenian terrorists in Azerbaijan at various times. It was precisely because of Ilham Aliyev’s emphatic urgings that use of the occupied and uncontrolled Nagorno Karabakh territories for international terrorism and drug smuggling was brought into spotlight. Ilham Aliyev had gained wide influence and recognition among the Western politicians on account of his objective and constructive speeches. So, he was elected the vice-speaker of the Parliament Assembly of the European Council in 2003.

The relentless activities of Ilham Aliyev set for upgrading the sport facilities and recreational amenities of the country and aimed at cultivation of the new healthy generation deserve a special appraisal.

Since he was appointed the president of the National Olympian Committee of Azerbaijan in 1997, Ilham Aliyev has been carrying out an invariable policy of creating a series of health-sport complexes throughout the entire country and appropriating funds and resources for establishment of the necessary material- technical basis to finance the promotion of the different branches of sport in Azerbaijan. As a result of his unflagging pursuit of accomplishment in this field, the sport has been revitalized and enlivened in Azerbaijan. The sportsmen of Azerbaijan have gained outstanding victories at the regional sport contests and international competitions. The fact that Baku has become an important center for holding various international sport competitions serves to elevate the international image of Azerbaijan across the globe.

As a professional politician and well-read expert on history of international relations, Ilham Aliyev has gained wide influence and respect in international arena as well. He has been to the USA, UK, Turkey, France, Russia, Ukraine, Switzerland, Kazakhstan, Uzbekistan, Slovakia, Poland, Georgia, Qatar, Italy, Saudi Arabia, China, Poland and so many other counties on official and state visits and delivered numerous acclaimed discourses at international conferences and congresses.

After winning the presidential elections of 2003 with an overwhelming majority, Ilham Aliyev started carrying out a policy of democratic, legal and secular state-building worked out by Heydar Aliyev. Since he came to power, implementation of economic reforms has been further accelerated in the country. Along with this a State Program has been adopted for social-economic development of the regions of Azerbaijan in the years of 2004-2008. On the order of Ilham Aliyev, special measures have been taken to ensure unfailing observance of human rights and civil liberties in the country. As a continuation of Heydar Aliyev’s political line, Ilham Aliyev follows the same guiding principles aimed at protection and preservation of the national- spiritual heritage of Azerbaijan. In view of that Ilham Aliyev shows great concern for the scientific study and dissemination of the history of Azerbaijan in the country. The decrees passed and enforced by Ilham Aliyev on compilation of the National Encyclopedia of Azerbaijan and broad issuance of wide-ranging books in Azerbaijani language and Latin script as well as increasing salaries of the scientists and scholars in accordance with their relevant academic degrees and multiplying stipendium of the undergraduate and postgraduate students demonstrate the magnitude of the steps taken in this regard.

As a result of the focused and purposeful work of Ilham Aliyev, today the foreign policy course laid down by Heydar Aliyev is successfully carried on. The main principle of this policy is to inform the world of the horrid atrocities committed by the Armenian aggressors who have occupied more than 20 percent of the Azerbaijani lands. Thanks to the dedicated commitment of Ilham Aliyev to the same political line, the majority of the world states have come to recognize and condemn Armenia as the violator of international norms and regulations. As the owner of broad vision and extensive knowledge, Ilham Aliyev has achieved wide influence and respect among the distinguished world politicians. Being wide awake to the fast-changing dynamics of the modern world and mindful of changes brought by globalization and integration, today Ilham Aliyev ably defends national interests of Azerbaijan at all the international meetings and high-ranking negotiations. Consequently, the role and share of Azerbaijan in resolution of both the regional and international problems grow day by day. To put it shortly, Azerbaijan has become the leading county of South Caucasus because of the insightful domestic reforms and foresighted foreign policies carried out by Ilham Aliyev.

Previous Restoration of the state independence in North Azerbaijan: the struggle for reinforcement of statehood (1991 – 2004)
Next Karabakh in ancient times 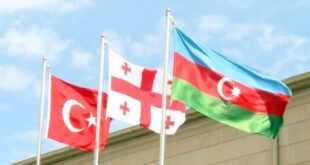