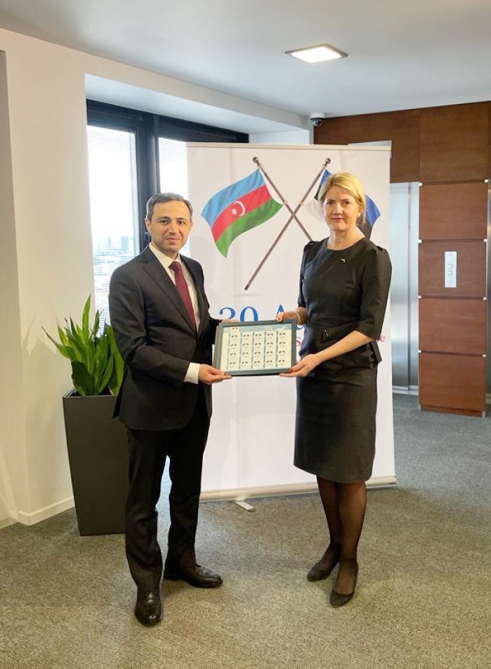 Azerbaijani Ambassador to Estonia Anar Maharramov has met with Estonian Minister of Foreign Affairs Eva-Maria Liimets on the occasion of the 30th anniversary of establishment of diplomatic relations between the two countries.

Eva-Maria Liimets presented the letter of congratulations to Ambassador Maharramov, as she extended her sincere wishes to her Azerbaijani counterpart Jeyhun Bayramov.

In his turn, Ambassador Maharramov presented the letter of congratulations from Azerbaijani Foreign Minister Jeyhun Bayramov and conveyed sincere wishes by the Azerbaijani FM to Minister Liimets.

Ambassador then presented the specially designed postage stamps marking the 30th anniversary of establishment of diplomatic relations between the two countries to Estonian FM. The postage stamps were issued by the Estonian national postal service (Omniva) on the initiative of Azerbaijan’s Embassy in Tallinn.

Maharramov expressed hope that Minister Liimets will pay a visit to Azerbaijan as soon as possible.

The sides also discussed bilateral relations, as well as the current state of Azerbaijan-Armenia negotiations.