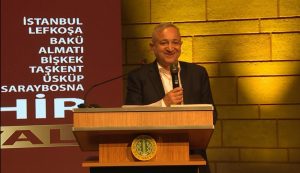 Organized by the Journalists Association of the Turkish World, the festival hosted 140 documentaries from eight countries and 28 regions.

The 3rd Turkish World Documentary Film Festival is being realized with the participation of universities and cinema television organizations from Turkey, the Turkish Republic of Northern Cyprus, Azerbaijan, Kazakhstan and Kyrgyzstan, Uzbekistan, Macedonia and Bosnia and Herzegovina.

Addressing the opening ceremony, Vagif Mustafayev hailed the organization of the festival and the activity of the jury.

The main purpose of the festival is to bring Turkish documentary filmmakers together to exchange ideas and promote Turkish culture through their documentaries.

This year, the 3rd Turkish World Documentary Film Festival with the slogan “8 countries, 8 cities!” will run from October 2 to November 10, 2018.