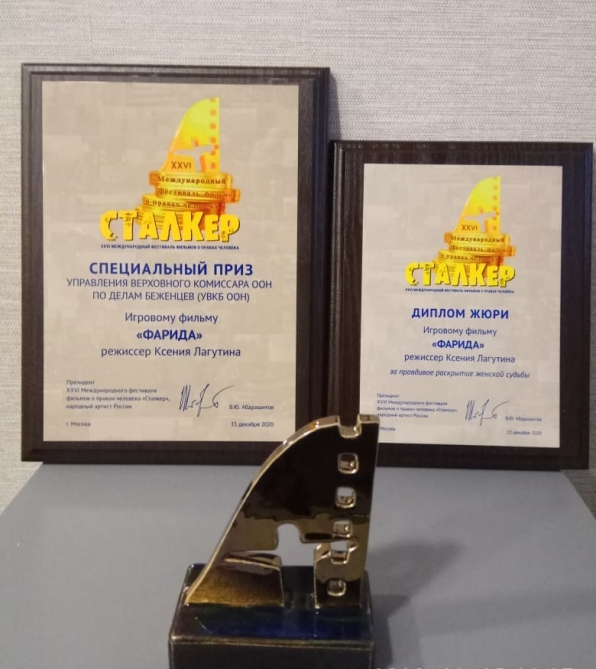 Director of the film Ksenia Lagutina was awarded the “Jury`s Diploma” for the truthful disclosure of the fate of women and the “Special Prize” of the United Nations High Commissioner for Refugees.

The International Human Rights Film Festival “Stalker” is the only such festival in Russia, and one of very few film showings in the world, which is aimed at establishing a consciousness of legal rights among wide audiences by the use of film – and to encourage filmmakers to make movies about human rights.

The film “Farida” was shot by the Narimanfilm film company in cooperation with the St. Petersburg School of New Cinema. The duration of the film is 70 minutes.

Screenplay and director of the film is Ksenia Lagutina, cameraman is Dmitry Nagovsky, sound engineer is Alexander Demyanov, costume designer is Philip Nyrkov, make-up artist is Alexandra Kosvintseva and producer is Nariman Mammadov. The main role in the film is played by young actress Maryam Ibrahimova. Abdukarim Nasirov, Dilya Ulasheva and other actors also starred in the film.

The film tells about a young girl with hearing problems from the village of Khinalig, who comes to St. Petersburg to find her husband. She doesn’t know anything about where he is now. The big city brings her together and divorces her with different people and turns her life upside down.

The film was shot in the genre of drama. The filming took place in St. Petersburg.