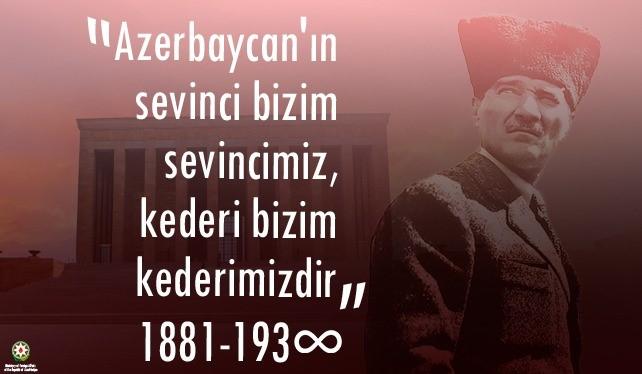 “We respectfully commemorate Ataturk, the founder of the brotherly Republic of Turkey,” Bayramov wrote on his Twitter account on November 10.

“Mustafa Kemal Ataturk is as dear and respected to you [Turks] as he is to Azerbaijanis,” the quote read.

November 10, 2021, marks the 83rd death anniversary of Ataturk – the founder and leader of the Republic of Turkey.

The name of Ataturk, who crowned with a victory every battle for the independence of his people and homeland, is inscribed in golden letters in Turkey’s, as well as the world’s history.

Mustafa Kemal Ataturk was born in 1881 in Thessaloniki.

On October 29, 1923, the Turkish Grand National Assembly proclaimed a republic headed by Mustafa Kemal Ataturk, who became its first president. He was elected to this post four times until his death in 1938, remaining in Turkey’s history as the longest-ruling president.

Mustafa Kemal, who won the battle of Sakarya against the Greeks on August 23, 1921, was awarded the titles “Marshal” and “Gazi”. In 1934 he was given the surname “Ataturk”, and its use by others was prohibited.