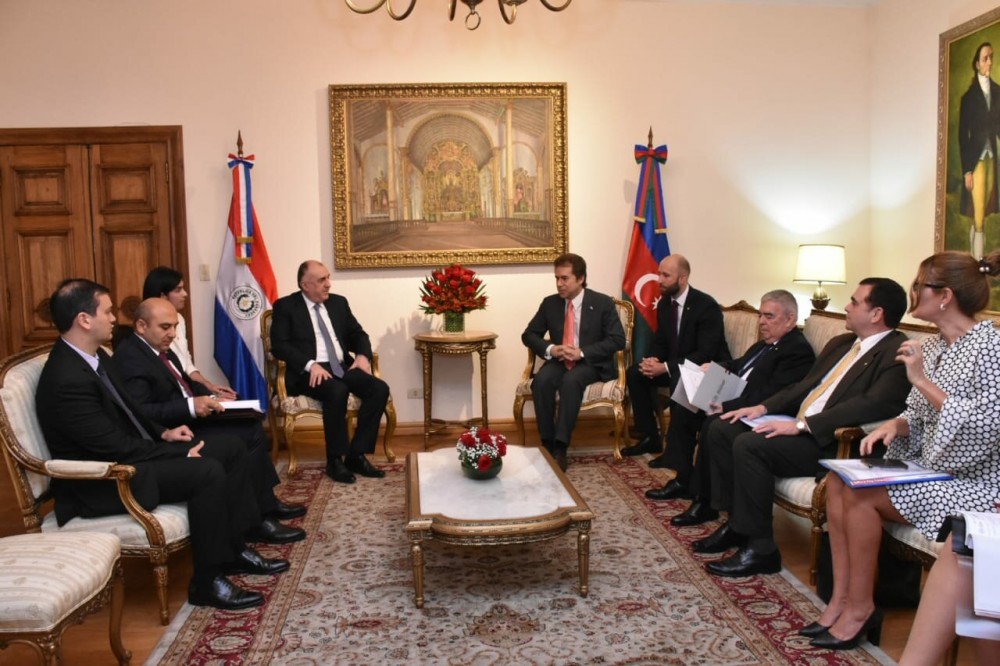 Azerbaijan`s Minister of Foreign Affairs Elmar Mammadyarov has met with Paraguayan counterpart Luis Alberto Castiglioni as part of his first official visit to the Republic of Paraguay.

The sides hailed the current level of political relations between Azerbaijan and Paraguay, and discussed mechanisms of strengthening political dialogue. They also exchanged views on cooperation opportunities in agricultural, transport, investment, education and other spheres. The sides agreed to establish the legal-contractual basis for further development of cooperation in these areas. Mutual intention on establishing the Azerbaijan-Paraguay Trade Chamber was expressed.

The Paraguayan foreign minister noted that despite the distance between the two countries, high level cooperation exists between the sides and the first official visit of the Azerbaijani FM would give an impetus to furthering the bilateral relations.

Elmar Mammadyarov spoke about the socio-economic reforms by the Government of Azerbaijan, as well as big energy and infrastructure projects successfully realized by the initiative and participation of Azerbaijan. In this regard, Minister Mammadyarov informed his interlocutor on the ongoing settlement process of the Armenia-Azerbaijan Nagorno-Karabakh conflict, which is a serious threat to regional security and main impediment to regional integration processes in the South Caucasus. The FM emphasized that the conflict should be settled on the basis of the sovereignty, territorial integrity and inviolability of internationally recognized borders of Azerbaijan and all internally displaced persons should return to their homelands. Elmar Mammadyarov stressed that the adoption of the statement by the Chamber of Deputies of the National Congress of Paraguay condemning the Khojaly genocide is highly appreciated.

Noting the successful cooperation of Azerbaijan and Paraguay within multilateral platforms, FM Mammadyarov expressed hope on participation of Paraguay at the highest level in the upcoming Baku Summit meeting of the Non-Aligned Movement to be held in October of this year within the chairmanship of Azerbaijan to the Movement.

Minister Elmar Mammadyarov, also held meetings with Victor Gonzalez, President of the Chamber of Senators, the upper house of the National Congress of Paraguay and Walter Harms, President of the Foreign Affairs Committee of the Chamber of Deputies of Paraguay. At the meetings the importance of strengthening the inter-parliamentary relations for development of bilateral ties was underlined and the usefulness of reciprocal visits by the legislative bodies of both countries was emphasized.