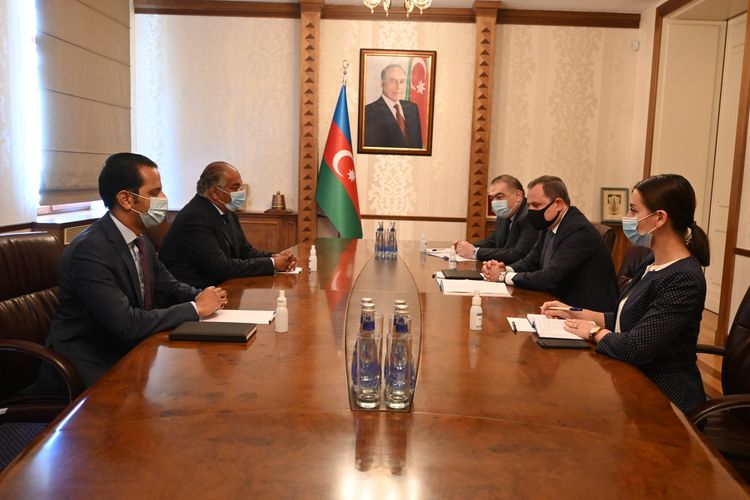 Foreign Minister Jeyhun Bayramov noted the special importance of the relations between Azerbaijan and Egypt, and highly valued the existing relations between both countries in political, economic, cultural and other areas. The cooperation and mutual support between the countries on bilateral and multilateral platforms were emphasized with satisfaction.

The sides exchanged their views about the realization of mutual visits between two states, the activity of the Intergovernmental Commission, the restoration of direct flights after pandemic and other issues. Also, it was noted that great potential exists for further enhancement of relations in the economic, trade and tourism spheres.

Foreign Minister informed the Egyptian Ambassador about the Armenia-Azerbaijan conflict and its serious consequences, the continued aggression policy of Armenia, the recent military provocation by the Armed Forces of Armenia along the border, the illegal activities carried out by Armenia in the occupied Nagorno-Karabakh and other adjacent regions of the Republic of Azerbaijan, including illegal resettlement policy, which undermine the peaceful resolution of the conflict and return of the Azerbaijani IDPs to their native lands. The necessity of full and unconditional withdrawal of occupying forces of Armenia from all territories of Azerbaijan and the return of the IDPs to their native lands in accordance with the decisions and resolutions of the international community, including the Arab Republic of Egypt, particularly the demands of the UN Security Council resolutions were emphasized.

Ambassador of Egypt in his turn expressed support of Egypt to the territorial integrity of Azerbaijan and noted that his country advocates the peaceful settlement of the conflict.

At the meeting, the sides also exchanged views on the other issues of mutual interest.