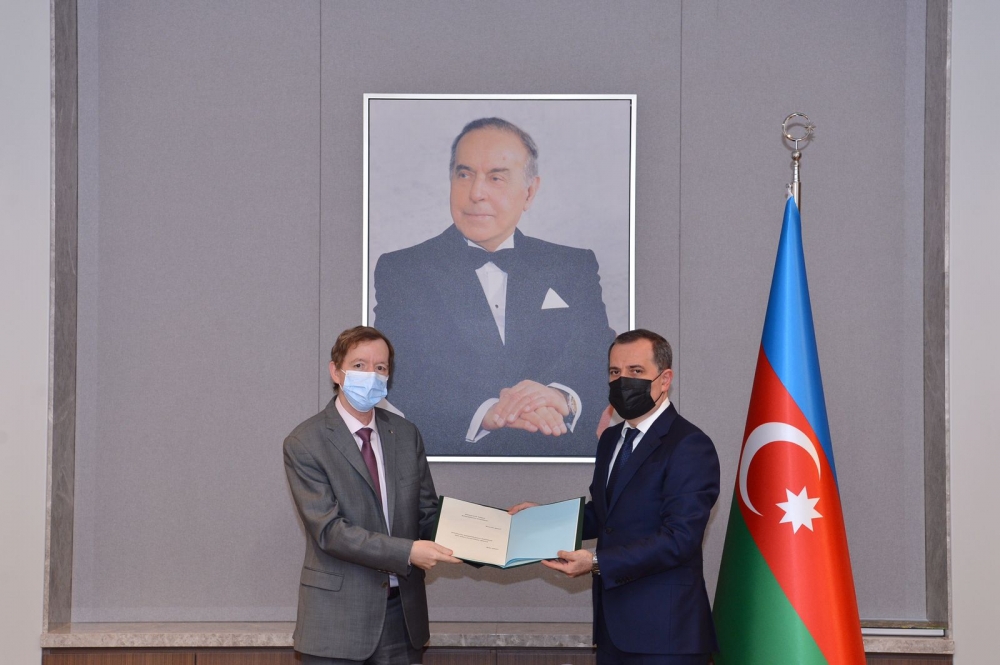 Azerbaijan`s Minister of Foreign Affairs Jeyhun Bayramov has met with newly appointed Ambassador of the People’s Democratic Republic of Algeria to the country Abdelouahab Osmane.

Receiving a copy of Ambassador Abdelouahab Osmane’s credentials, FM Jeyhun Bayramov congratulated the Algerian ambassador on his appointment and wished him success in his activities.

Minister Bayramov noted that Azerbaijan attaches great importance to the development of relations with Algeria, referring to the importance of high-level contacts between the two countries in this regard. The FM stressed that cooperation between the two countries is of great importance in expanding political, economic, humanitarian, as well as people-to-people contacts. He noted that Azerbaijan and Algeria continue to successfully cooperate in the UN, the Organization of Islamic Cooperation, the Non-Aligned Movement and other international platforms.

FM Bayramov said that Algeria’s constant support for Azerbaijan’s position in connection with the former Armenia-Azerbaijan conflict, based on international law, was highly appreciated by Azerbaijan.

The minister also briefed the Algerian ambassador on the current situation in the region, the post-conflict recovery and reconstruction process, issues related to the implementation of trilateral statements, opportunities for normalization of relations with Armenia and unilateral steps taken by Azerbaijan in this direction, as well as Azerbaijan’s vision for the future development of the region in peace, security and progress.

Ambassador Abdelouahab Osmane expressed satisfaction with his appointment to Azerbaijan. He said his country has always preferred peaceful diplomacy and, in this regard, was satisfied with the opportunities for normalization of relations between Azerbaijan and Armenia.

Emphasizing the importance of strengthening political and economic ties between Azerbaijan and Algeria, the ambassador said he would spare no effort to do so.

During the meeting, the sides also exchanged views on the prospects of development of the bilateral relations.