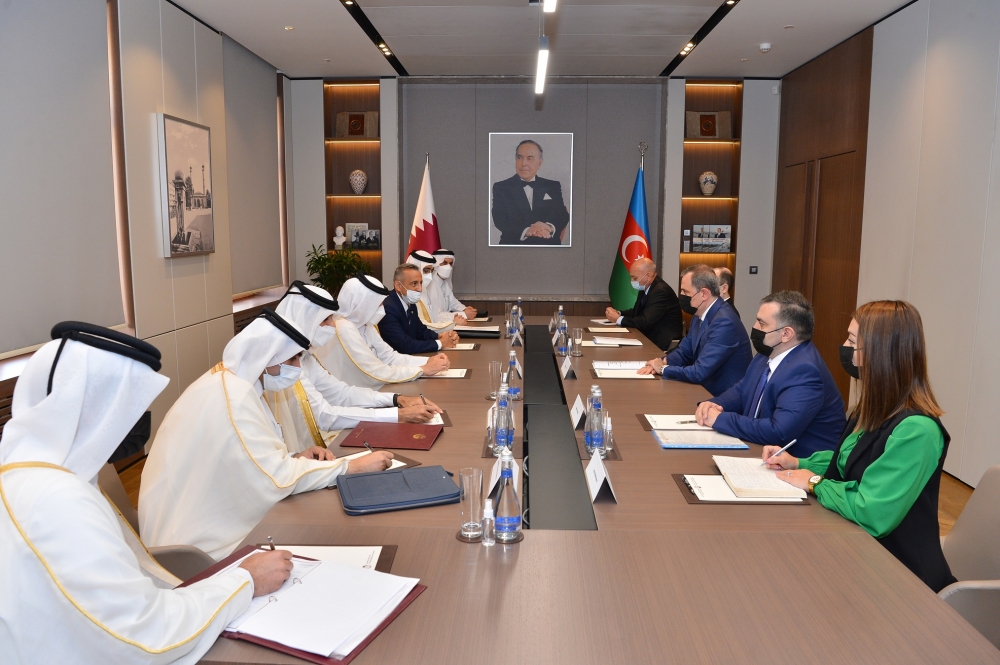 Minister Jeyhun Bayramov warmly welcomed the delegation of the friendly country of Qatar and spoke about the deep cultural and religious ties that unite the two countries. The FM stressed the importance of high-level reciprocal visits in terms of further development of relations and highlighted the existence of notable mutual understanding between the countries. It was stressed that there is cooperation and dialogue between Azerbaijan and Qatar on both bilateral and multilateral platforms.

State Minister Soltan bin Saad Al-Muraikhi expressed gratitude for warm reception and conveyed the greetings of Minister of Foreign Affairs of the State of Qatar Sheikh Mohammed bin Abdulrahman Al-Thani to Minister Bayramov. The State Minister said that a number of issues of the cooperation agenda were thoroughly discussed within the framework of a new round of consultations between the ministries of foreign affairs of the two countries held in Baku.

Minister Jeyhun Bayramov stressed the importance of holding regular political consultations in order to explain the positions of the two countries in detail and ensure mutual understanding. The FM expressed gratitude to the State of Qatar for its continued support to Azerbaijan’s position based on international law, as well as for its unequivocal support of the resolutions annually adopted with regard to the country by the Organization of Islamic Cooperation. Minister Bayramov informed his interlocutor about the current situation in the region, the grave consequences of the Armenia’s almost 30 year-long policy of occupation, the liberation of Azerbaijan`s territories as a result of the 44-day Patriotic War, as well as the restoration and reconstruction works in the liberated territories.

It was noted that despite the aggressive policy pursued against Azerbaijan for decades, the country is ready to normalize relations with the neighboring country on the basis of the principles of the international law, and that this position was voiced by the head of state.

During the meeting, the Qatari official was also informed about the Alat Free Economic Zone, and the possibilities for the involvement of Qatari companies in this project were highlighted. The importance of cooperation in the area of information exchange between the ministries of foreign affairs of the two countries was also noted.

The State Minister for Foreign Affairs of Qatar praised the Azerbaijan’s position on ensuring peace and normalization of relations with the neighboring country. He expressed interest in involving Qatari companies in the implementation of projects within the framework of the rehabilitation process carried out in the liberated areas. The importance of usage of the existing opportunities for cooperation in the area of information exchange was also stressed.

The Qatari official wished prosperity and development to the people and state of Azerbaijan.

Previous Palace of the Shirvanshahs hosts evening of music, literature and art dedicated to Nizami Ganjavi
Next Azerbaijan’s Foreign Ministry: It is sovereign right of every state to conduct various exercises in the territory within its international borders