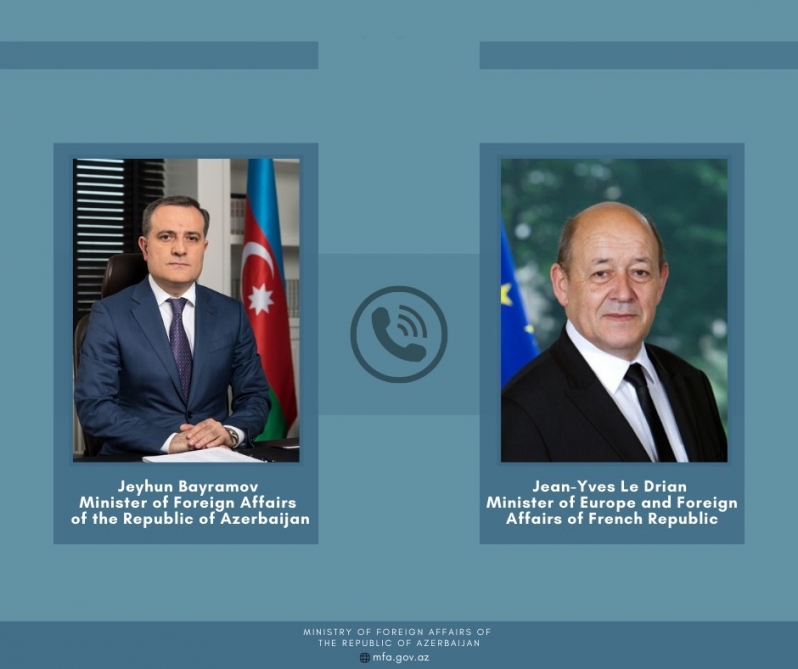 Azerbaijan`s Foreign Minister Jeyhun Bayramov has had a telephone conversation with his French counterpart Jean-Yves Le Drian. The sides exchanged views on the current situation in the region.

FM Jeyhun Bayramov informed the French minister of the violation of humanitarian ceasefire by the armed forces of Armenia for the second time after the formal declaration of the truce. He noted that intensive shelling of the Azerbaijani positions and an attempt to attack in the directions of Fuzuli, Jabrayil and Hadrut districts openly shows that Armenia is ignorant of the ceasefire and aims to regain the positions in the occupied territories of Azerbaijan. Bayramov emphasized that violation of humanitarian ceasefire shows once again the disinclination of the Armenian Republic to its commitments under international humanitarian law.

Minister Jean-Yves Le Drian stressed the importance of implementing the humanitarian ceasefire, noting the necessity of substantial negotiations without delay under the auspices of the OSCE Minsk Group Co-Chairs.

Minister Bayramov emphasized that Armenia’s leadership bears responsibility for this war crime. He added that the withdrawal of all Armenian armed forces from the occupied territories of Azerbaijan in accordance with the related resolutions of the UN Security Council is necessary for ensuring peace in the region.

Previous President Ilham Aliyev: Turkish-Azerbaijani unity is unshakable, and we stand by each other in difficult times
Next Hikmat Hajiyev: Armenia continues to commit war crimes against Azerbaijani people in gross violation of all conventions and laws