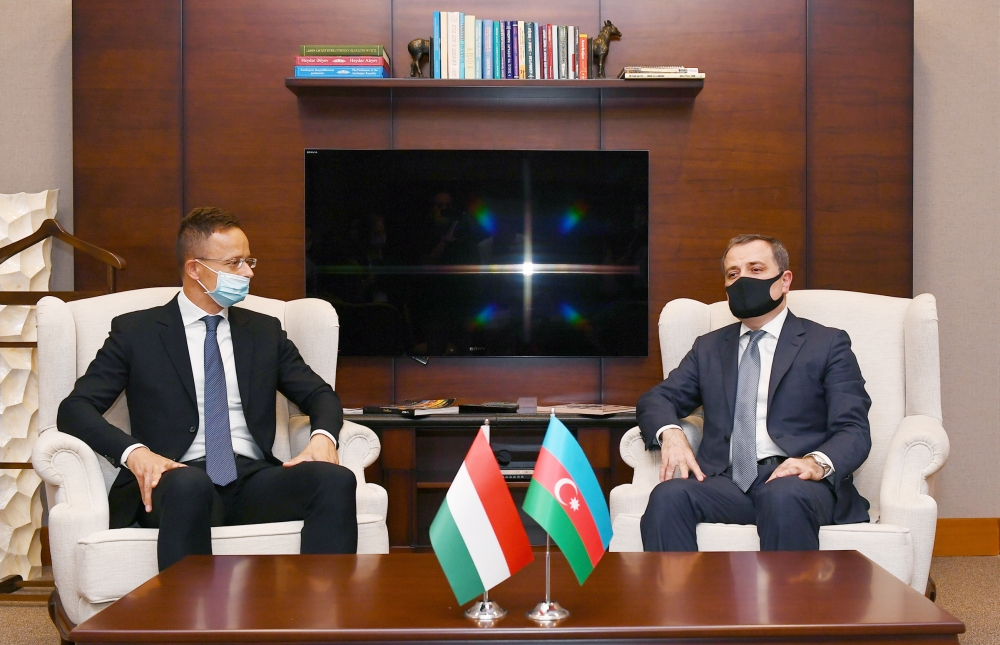 The meeting started in tête-à-tête format and later continued with the participation of delegations in an extended format.

During the meeting, the Azerbaijani FM cordially greeted his Hungarian counterpart and received congratulations from Minister Peter Szijjártó.

The ministers hailed the development of existing strategic cooperation between the two countries and stressed that efforts would be made for further strengthening bilateral relations in a number of areas, including economy, trade, education, culture, tourism, health and etc.

Minister Bayramov briefed his counterpart on the situation in the region, especially the recent provocations by Armenia, and stated that the main reason for the escalation of tensions in the region is the occupation of the Azerbaijani territories by Armenia for about 30 years. Referring to the strong position of the international community on this issue, Jeyhun Bayramov stated that, unfortunately, adopted decisions and resolutions were not implemented, and that double standard was observed in the issue. Briefing his counterpart on the latest military provocation of Armenia on the border and the current situation in the region, FM Bayramov noted that the only way for ensuring lasting peace, security and prosperity in the region is the withdrawal of armed forces of the aggressor state from the occupied Nagorno-Karabakh region of Azerbaijan and seven adjacent regions, as required by UN Security Council resolutions and relevant decisions and documents of other organizations.

Expressing concern over the current situation in the region, FM Peter Szijjártó stressed that Hungary’s position on the Armenia-Azerbaijan Nagorno-Karabakh conflict is clear and unchangeable and that Hungary strongly supports the territorial integrity of Azerbaijan within its internationally recognized borders. As for the double standards demonstrated by the international community, Minister Szijjártó noted that this approach is also observed by Hungary, noting that the principle of mutual respect underlies Hungarian foreign policy.

The sides exchanged views on the important role of Azerbaijan in the diversification of Europe’s energy supply, especially gas supply. The Hungarian minister expressed his country`s interest in benefiting from gas supply projects implemented with the initiative and participation of Azerbaijan.

The issues of expanding the treaty-legal framework between the two countries were also discussed at the meeting.

The FMs expressed confidence that the dynamics of existing positive visits and exchanges between the two countries will continue in the future.

Touching upon Azerbaijan’s relations with the European Union, Peter Szijjártó noted that Hungary supports the early completion of negotiations on a new agreement between the EU and Azerbaijan.

Peter Szijjártó also invited his Azerbaijani counterpart to pay an official visit to Budapest after the normalization of the situation about the pandemic.