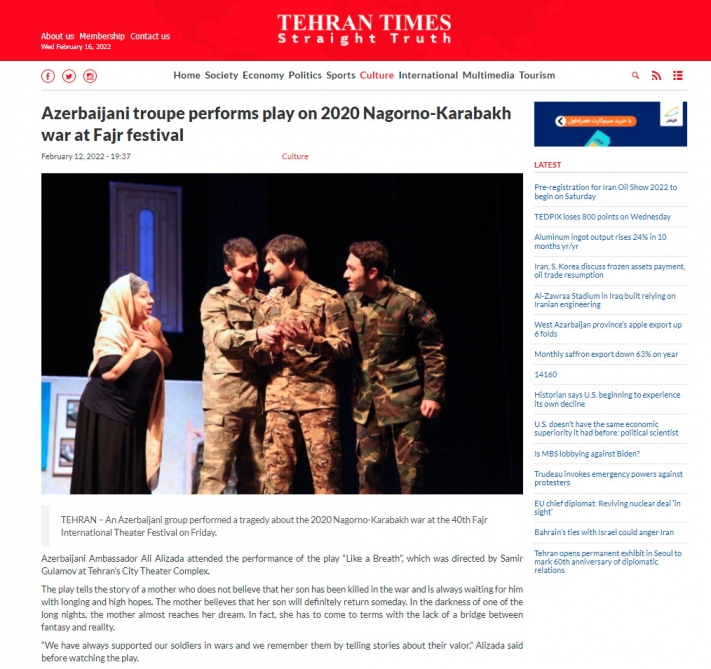 Azerbaijani Ambassador Ali Alizada attended the performance of the play “Like a Breath”, which was directed by Samir Gulamov at Tehran’s City Theater Complex, according to Tehran Times.

The play tells the story of a mother who does not believe that her son has been killed in the war and is always waiting for him with longing and high hopes. The mother believes that her son will definitely return someday. In the darkness of one of the long nights, the mother almost reaches her dream. In fact, she has to come to terms with the lack of a bridge between fantasy and reality.

“We have always supported our soldiers in wars and we remember them by telling stories about their valor,” Alizada said before watching the play.

“For sure, theatergoers here will feel impressed by the play and will show sympathy,” he added.

The troupe performed the play at the Azerbaijan State Academic Musical Theater on November 8, 2021 to celebrate Victory Day, which is observed every year since 2020 in commemoration of Azerbaijan’s victory in the Nagorno-Karabakh war, which is called “The Patriotic War” in the country.

During the performance, which was also attended by several Turkish diplomats, Alizada said that the victory belongs to all Muslims.

He also added that there are many cultural affinities between Iranian and Azerbaijani people and hoped that the participation of the troupe would help widen cultural relations between the two countries.

The troupe also performed “Shy Girl” (“Utancaq Qiz”) based on a story from the Russian writer Fyodor Dostoevsky on Saturday. One more performance has also been arranged for each play.

Groups from Afghanistan, Armenia, Iraq, Algeria and several other countries are scheduled to perform during the Fajr International Theater Festival, which will run until February 15.

Groups from Italy and France canceled their performances at the festival due to COVID-19 restrictions for departure from their country of origin.