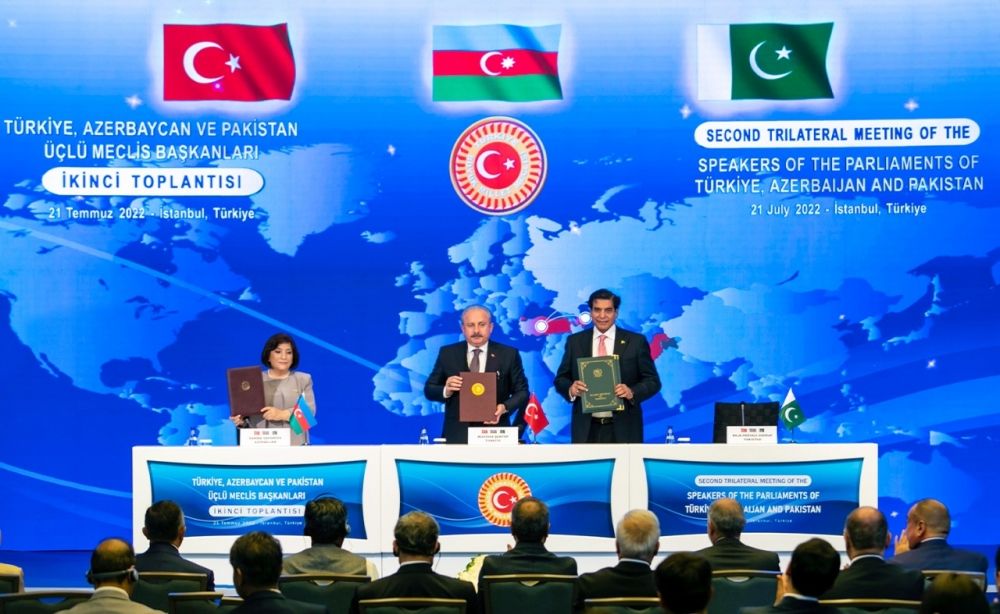 Azerbaijan, Turkiye, and Pakistan have signed a declaration as part of the second trilateral meeting of the parliament speakers in Istanbul, Turkiye, on July 21. Azernews reports.

In their press statements following the signing ceremony, Azerbaijani Parliament Speaker Sahiba Gafarova, as well as her Turkish and Pakistani counterparts Mustafa Sentop and Raja Pervaiz Ashraf respectively – stressed that the signed Istanbul declaration is of great importance in terms of further development of relations between the three fraternal countries.

Recalling that Turkiye marks the sixth anniversary of the Day of Democracy and National Unity on July 15, the chairman of the Milli Majlis emphasized that the people and state of Azerbaijan categorically condemned this treacherous coup attempt from the beginning, and the nation was always with brotherly Turkiye.

She reminded that the first trilateral meeting of Azerbaijani, Turkish and Pakistani parliament speakers was conducted approximately a year ago at the initiative of the Azerbaijani parliament and as a result, a tripartite cooperation format was established during the summit.

“This format is of great importance. As a result, today’s high-level ties between our fraternal nations are distinguished by the ongoing growth of collaboration in a variety of disciplines. By providing this forum, we legislators, as representatives of our people, contribute to that process. This platform also underlines the importance of parliamentary diplomacy as a modern tool of international collaboration,” Gafarova underlined.

She added that over the past period, joint activities and effective cooperation within the framework of international parliamentary organizations once again confirm the need for the tripartite format.

Within the framework of the second trilateral meeting, the countries considered the possibilities of further strengthening this format, turning it into a practical cooperation platform between the parliaments of the three countries, and discussed future development prospects, the speaker said.

“I would also like to mention the Istanbul Declaration that we adopted within the framework of the second trilateral meeting. The declaration reflects our consensus and common position on many important issues. In this sense, the declaration is important in terms of demonstrating the mutual trust and support of the parliaments of our brotherly countries. I especially express my gratitude to the parliaments of the brotherly countries for their support of the restoration and reconstruction of the Azerbaijani lands liberated from occupation and for the establishment of friendly neighborly relations in the South Caucasus based on the principles of sovereignty, territorial integrity, and inviolability of borders,” Gafarova stressed.

She added that the discussions and decisions at the meeting will contribute to further strengthening and expansion of the trilateral cooperation for the sake of the interests and welfare of the three fraternal countries and their peoples.

Previous Saudi Arabia and Azerbaijan to set up working group on cooperation in tourism and cultural fields
Next Director of Georgian National Museum: Historical justice has been restored in Karabakh