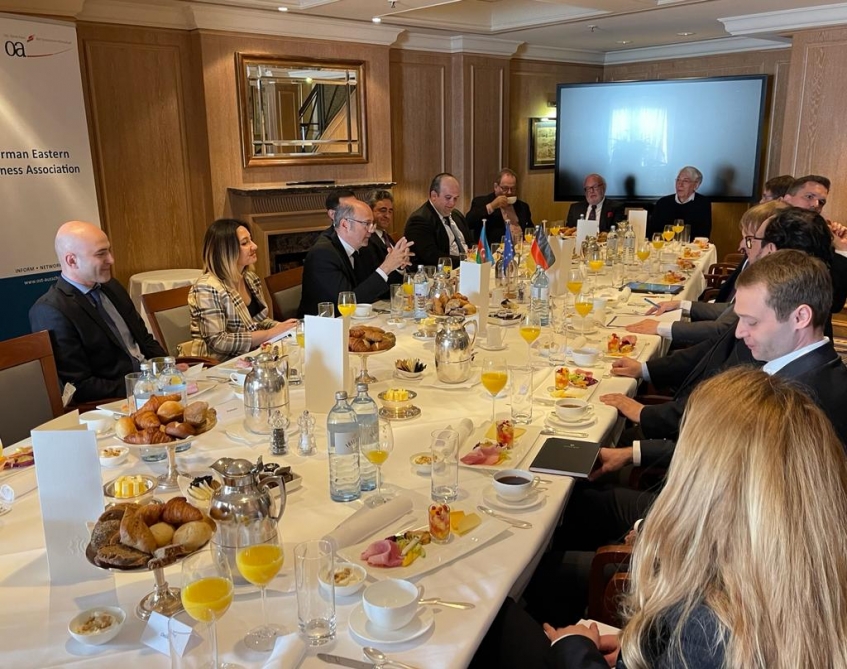 As part of the Berlin Energy Transition Dialogue conference, a roundtable has been held on the topic “Azerbaijan – oil, gas and beyond: prospects for a future energy partnership” with the participation of German energy companies, the Ministry of Energy told AZERTAC.

Azerbaijan`s Energy Minister Parviz Shahbazov spoke at the roundtable with the participation of representatives of the German Wind Energy Association, the German Energy Agency (DENA), the Eastern Business Association and the Federation of Industries.

Stressing that Germany’s trade with Azerbaijan, an important trade partner in the South Caucasus, increased by 57% last year, the Minister highlighted the prospects for developing cooperation between the two countries in new areas. It was noted that the end of the long-term conflict fully ensured security, which is one of the main prerequisites for the inflow of investments into the region. In particular, the widespread use of renewable energy sources both in the liberated Karabakh and East Zangazur economic zones and in the country as a whole has been identified as one of the national priorities for the country. All this, along with the potential and goals of Azerbaijan related to green energy, the rich experience of German companies, as well as the combination of possible investment opportunities, can open a new page in energy cooperation.

Minister Parviz Shahbazov noted that although Azerbaijan has large oil and gas resources and is their exporter, one of the main goals is to develop the field of renewable energy sources and become a green energy exporter.

“Given the large solar and wind energy projects currently being implemented, the rich potential of renewable energy sources on land – about 27,000 megawatts, and offshore – 157,000 megawatts, as well as plans to build two new lines that will ensure an increase in electricity exports to Europe, it can be said that Azerbaijan has great prospects to become a source of the green energy corridor. This also makes Azerbaijan’s next contribution to the diversification of Europe’s energy supply through green energy. Companies from Germany can become important partners in our long-term energy cooperation in this direction.”

The effective cooperation relations with VPC, Siemens, Berlin Wind and other German companies in the field of energy were talked at the event. It was also noted that fruitful cooperation was established with the German Energy Agency-DENA to prepare 4 pilot project proposals to support the development of decentralized renewable energy in Azerbaijan. To expand cooperation, German companies have been invited to participate in renewable energy projects.

At the round table, questions of interest to the company were clarified, information about promising projects was provided, and extensive discussions of cooperation opportunities were held.