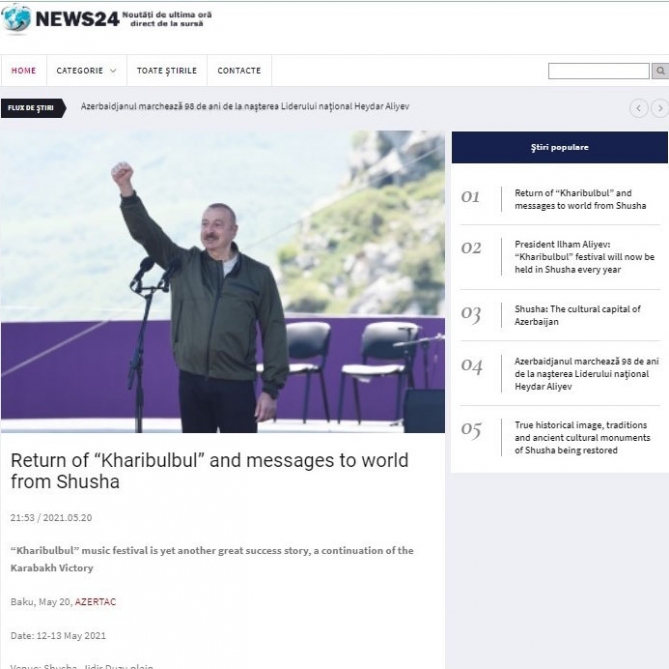 The Romanian News24hours portal has published an article by AZERTAC Chairman of Board Aslan Aslanov headlined “Return of “Kharibulbul” and messages to world from Shusha”.

The article, citing AZERTAC news agency says: “The valiant Azerbaijani army thanks to the determination, courage and leadership skills of victorious Commander-in-Chief Ilham Aliyev, put an end to the 30-year occupation and years of waiting in 44 days, thus writing an unprecedented heroic epic. And the Shusha operation was the certainly most glorious page, the finale of this epic.

The liberation of Shusha actually meant an end to Armenian army and the Armenian state, because a day after that Armenia was forced to sign an act of surrender drawn up on our terms, and we returned Lachin, Kalbajar and Aghdam districts without firing a single shot. It is no coincidence that 8 November, the day of the liberation of Shusha, was declared an official state holiday in Azerbaijan, the Victory Day, and we will celebrate this holiday every year.”

“The “Kharibulbul” music festival was also quite remarkable from the point of view of an important message sent to the whole world. Folk bands from various parts of our country, renowned artists, prominent figures of Azerbaijani culture and representatives of the media were gathered in Shusha on 12-13 May. The performances by representatives of various peoples living in Azerbaijan demonstrated that this is how countries should develop. Only multi-confessional and multi ethnic countries and societies can develop, can have unity, national solidarity and peace. For many years, Azerbaijan has been promoting multiculturalism and the coexistence of different peoples both in the country and internationally. We share our experience and show that this is possible. The “Kharibulbul” music festival has become another confirmation of this,” the article emphasizes.