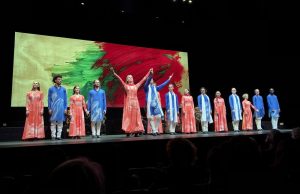 Azerbaijan’s living vocal treasure Alim Gasimov and his daughter Farghana Gasimova  mesmerized viewers in London.Mugham singers performed at the Sadler Wells Theater in London, Azertag reported.The concert program was brought in line with the opera by great national composer Uzeiyir  Hajibeyli  “Leyli and Mejnun”. The choreographer is Mark Morris.The mugham singers created a breathtaking show in London. One of the world’s truly gifted singers, Alim discovered the world of mugham as a child, when he began singing for his own enjoyment. He grew up in the town of Shamakhi, 100 km northwest of Baku. “I had no idea that I would become a singer,” he recalls.Gasimov continues to play an important role in promotion of the Azerbaijani culture, especially mugham around the world.He was awarded the International Music Council-UNESCO Music Prize, one of the highest international accolades for music in 1999. For that achievement, he was quoted by the New York Times as simply one of the greatest singers alive, with a searing spontaneity that conjures passion and devotion, contemplation and incantation.Also known as an artist of supreme versatility, Gasimov has collaborated and performed with some of the world’s leading musicians, including Yo-Yo Ma, Kronos Quartet and Jeff Buckley.People’s Artist of Azerbaijan Alim Gasimov was one of four Azerbaijanis among the 500 most influential Muslims in the world , chosen by competition , conducted by the Center for Strategic Studies and the famous American Georgetown University in Jordan.The daughter of the mugham master followed in her father’s footsteps.  Her amazing talent was discovered in 1995, when at the age of sixteen, she joined father in a concert tour in Germany.Over the years, Farghana Gasimova, along with her father and teacher Alim Gasimov, has successfully represented Azerbaijan in the international arena, making a significant contribution to the development and promotion of mugham.She received twice presidential award for developing Azerbaijani music in 2012 and 2014.