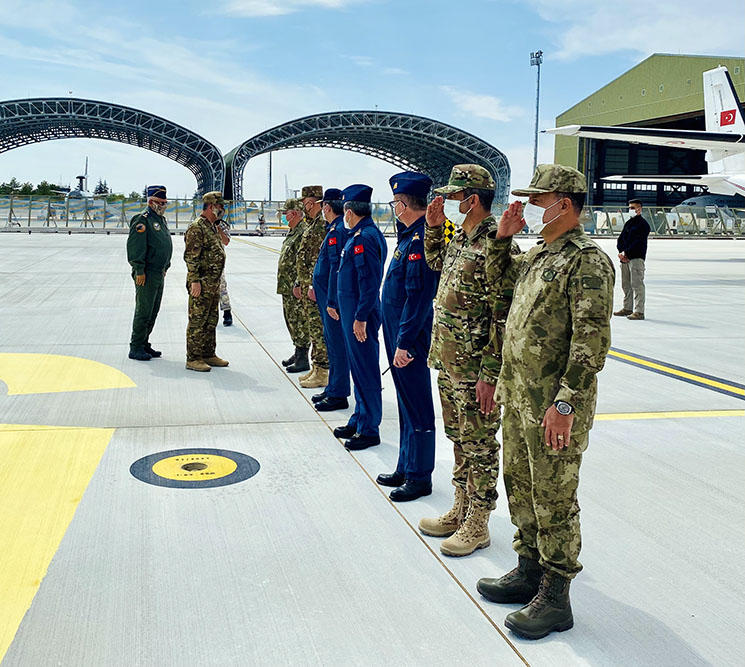 As part of the visit, Hasanov and Tahirov are to meet the Turkish top brass and attend the Distinguished Visitors Day of the TurAz Falcon – 2021 joint flight-tactical exercises held in Konya.

The parties discussed the development of cooperation in military, military-technical, military-educational, engineering and other fields.

It should be noted Azerbaijan and Turkey actively collaborate in various military spheres. Often the air, sea and naval forces of the two countries conduct joint tactical drills.

Azerbaijan’s military pilots are attending the TurAz Falcon – 2021 joint flight and tactical drills that have been underway in Konya since September 2.

The joint exercises, which will last until September 17, aim to improve the interaction between the two countries’ army units during combat operations, to develop the commanders’ military decision-making and unit management skills.

On September 6, the two countries held joint tactical drills in Azerbaijan’s liberated Lachin region under the bilateral military cooperation accord. During the drills, special attention has been paid to improving servicemen’s skills to use modern combat and other military equipment in difficult terrain.

Moreover, the Azerbaijani and Turkish underwater offence and defence groups conducted the next stage of their joint military exercises in early September. As a part of the task at the drills, the underwater groups successfully rescued the ship captured by hypothetical enemies in the Azerbaijani sector of the Caspian Sea.

Furthermore, Baku is hosting the Three Brothers – 2021 joint international drills of the Azerbaijani, Turkish and Pakistani special forces that started on September 12 and will last until September 20.

The drills aim to improve the coordination among the special forces units of friendly and partner countries during combat operations, prepare for operations in peacetime and wartime, exchange knowledge and experience.

During the 44-day war with Armenia in 2020, Turkey was among the first countries voicing political support for Azerbaijan. Turkey also backs Azerbaijan in the restoration of the country’s liberated territories.

On June 15, 2021, the two countries signed a memorandum of alliance that cemented the existing military, political and economic cooperation.

The Shusha Declaration on Allied Relations that President Ilham Aliyev and his Turkish counterpart Recep Tayyip Erdogan signed during the first official visit to Shusha eight months after Azerbaijan’s victory in the war with Armenia, also focuses on defence cooperation.

Previous President Ilham Aliyev: Azerbaijan is one of the leading countries in the world in terms of natural gas supply
Next Azerbaijan shares data on certificates of contraindication to vaccination against COVID-19